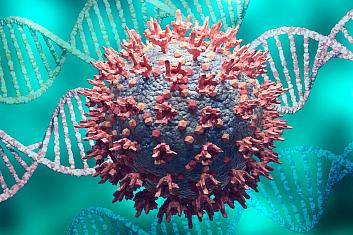 Researchers from the National Cancer Institute, part of the National Institutes of Health, and their collaborators have discovered that people of European and African ancestries who were hospitalized for COVID-19 are more likely to carry a particular combination of genetic variants in a gene known as OAS1 than patients with mild disease who were not hospitalized. People with this combination of genetic variants also remain positive for SARS-CoV-2 infection longer. However, interferon treatment may reduce the severity of COVID-19 in people with these genetic factors. Interferons are a type of protein that can help the body’s immune system fight infection and other diseases, such as cancer.

These findings build on previous studies that have suggested that genetic factors, such as genetic variants affecting OAS antiviral proteins that facilitate the detection and breakdown of the SARS-CoV-2 virus, may influence the risk of SARS-CoV-2 infection.

The NCI researchers and their collaborators found that treatment of cells with an interferon decreased the viral load of SARS-CoV-2. The researchers also analyzed data from a clinical trial in which patients with COVID-19 who were not hospitalized were treated with the recombinant interferon pegIFN-λ1 and found that treatment improved viral clearance in all patients; those with the OAS1 risk variants benefitted the most. The results suggest that interferon treatment may improve COVID-19 outcomes and specifically in patients with certain OAS1 genetic variants who have impaired ability to clear infection.