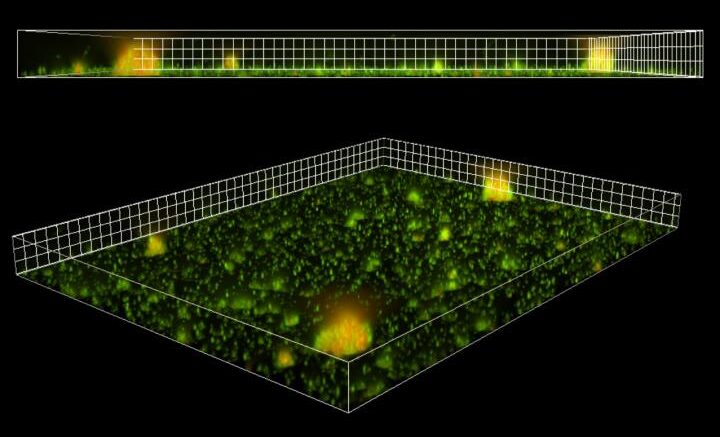 The mechanism by which acute viral respiratory infections promote secondary bacterial growth and infection in the airways depends on iron-carrying extracellular sacs secreted by the cells lining the host's airways, report researchers from the University of Pittsburgh School of Medicine in a paper published today in Cell Reports.

The sacs, or "vesicles," which carry iron bound to a protein called transferrin, associate with bacterial cells and supply them with essential nutrients, promoting the growth of expansive bacterial communities. The finding gives us a glimpse into how bacteria exploit the host's defense system against pathogens and can offer a new way for creating therapies to prevent secondary bacterial infections in the clinical setting.

"The development of chronic bacterial infections often is preceded by acute viral infections, and such co-infections increase patients' likelihood of death or lifelong disability," said senior author Jennifer Bomberger, PhD, associate professor in the Department of Microbiology & Molecular Genetics at Pitt. "We wanted to understand what it is that the virus is doing that allows bacteria to get a foothold in the patient's airways."

Preventing and controlling secondary lung infections by increasingly antibiotic-resistant bacteria, such as Staphylococcus aureus and Pseudomonas aeruginosa, remains a challenging problem in health care. According to reviews of historic autopsy reports, more than 90% of deaths during the 1918 influenza pandemic likely resulted from secondary bacterial pneumonia and, to this day, up to 30% of adults hospitalized with viral community-acquired pneumonia develop bacterial co-infections.

To study the mechanism of viral-bacterial interactions in chronic lung disease, the Pitt researchers used a model of respiratory syncytial virus, or RSV, and P. aeruginosa co-infection, the severity of which depends on P. aeruginosa's ability to form biofilms--large communities of bacteria encased in a polymeric matrix.

Using in vitro studies and fluorescent imaging, scientists showed that the production and secretion of extracellular vesicles--two processes that routinely occur in different cell types in the body, including the respiratory epithelium--are boosted by an acute viral infection. Crucially, these vesicles directly associate with P. aeruginosa biofilms and promote their growth.

"Extracellular vesicles naturally occur in the body and are used by the organism as a communication tool," said Bomberger. "It seems that bacteria co-opted this process for their own benefit."

While the exact mechanism of how extracellular vesicles attach to bacteria remains to be explored, researchers found that vesicles carry protein-bound iron on their surface, supplying bacteria with necessary nutrients.

"It would be interesting to see the implications this mechanism has for the host's immune response," said Matthew Hendricks, Ph.D., a lead author of the paper and a former graduate student in Bomberger's laboratory. "If extracellular vesicles can shield bacteria from the immune cells, that could decrease the host's ability to detect the infection and help bacteria evade the immune response."

It also appears that the mechanism of extracellular vesicle-dependent interaction between viruses and bacteria is universal for different types of viruses, including other respiratory viruses and viruses that attack other mucosal locations, such as the gastrointestinal tract.

Source: University of Pittsburgh Schools of the Health Sciences