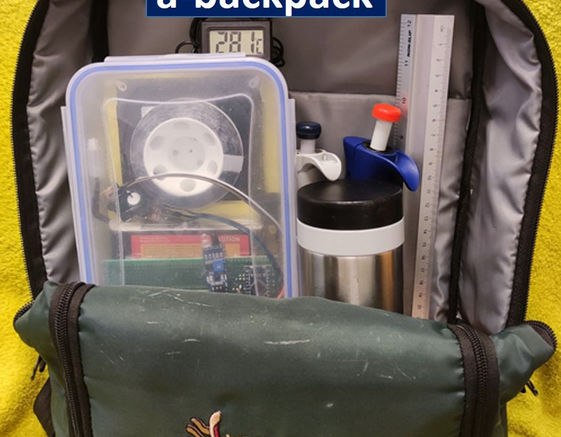 Researchers have developed a $51 “lab-in-a-backpack” that could expand the ability of resource-poor regions to offer fast, reliable, noninvasive detection of SARS-CoV-2. E. Emily Lin and colleagues at Queen Mary University of London outline the new system in the open-access journal PLOS ONE on Jan. 26, 2022.

Efforts to bring COVID-19 vaccines to resource-poor countries are underway, but will take two to three more years to achieve full vaccination. In the meantime, SARS-CoV-2 testing is needed to prevent spread, by enabling such measures as contact tracing, early detection in healthcare workers, safe travel, and other benefits. However, many regions lack the practical and financial ability to conduct an adequate amount of reliable testing.

To improve COVID-19 testing options, Lin and colleagues have now created a $51 lab-in-a-backpack system. This system uses noninvasive saliva sampling instead of an uncomfortable nose or throat swab. It processes 6 samples in 90 minutes using a technique known as reverse transcription loop-mediated isothermal amplification (RT-LAMP), which has similar sensitivity to PCR testing. The cost of the chemicals needed to process each saliva sample is $3.50; commercial LAMP tests cost $7 to $24 in bulk.

The new, standalone system is portable and can be used in settings that lack expensive infrastructure. It includes a centrifuge, named CentriDrive, that is easily constructed from recycled computer hard drives and can be powered by a rechargeable battery or hooked up to an automobile battery. It comes with straightforward instructions that can be followed with minimal training.

The researchers evaluated the reliability of the lab-in-a-backpack system by using it to test saliva samples combined with known amounts of SARS-CoV-2 RNA. They found the system to be effective and sensitive, capable of detecting as few as 4 viral RNA copies per microliter of saliva—a lower level than is actually found in infected people.

The researchers hope the lab-in-a-backpack could help mitigate the impact of the COVID-19 pandemic by enabling an increased amount of self-testing at home, testing in the field, and mobile testing in a wider variety of cultures and settings, such as refugee camps and disaster zones.

The authors add, "After vaccines, tests are the second-most important component in the fight against the pandemic. So far we have put up with the exorbitant prices of some of these quick turnaround tests, but it's time to open up the competition of ideas so we can reduce costs and make them more accessible. Some of the current LAMP tests available, and sold at airports like Heathrow, can cost around £85. We've shown that the portable lab can be half the cost of such a test. We believe in the beginning the kits can be used in schools as demos for a currently relevant science experiment. Upon validation, we are confident it should be possible to develop commercial tests based on the kits for under £10."