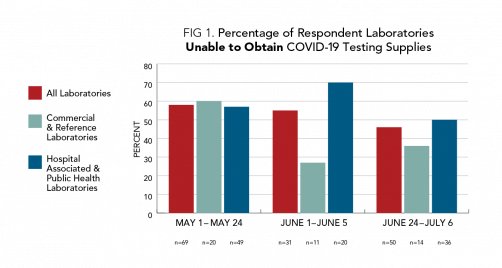 A new survey of U.S. clinical laboratories conducted by AACC has found that nearly half of all responding labs still do not have the supplies they need to run COVID-19 tests. AACC presented these findings to the White House Coronavirus Task Force today in a letter that calls on the federal government to take a more active role in alleviating this problem, so that labs can increase their testing capacity in the midst of the virus’s latest surge.

As coronavirus cases in the U.S. soar, the country’s labs have continued to work tirelessly to ramp up testing to help bring the pandemic under control. However, even though U.S. labs are now performing an average of 800,000 COVID-19 tests per day—which is double the average daily number of tests performed in late May—labs in many areas are reporting delays of up to a week in getting test results back to patients. These delays render testing essentially useless in acute patient care and in contact tracing. The main cause of these crippling delays is the persistent shortage of testing and other essential supplies. Labs have struggled with this problem since the pandemic began, and AACC—a medical professional organization that represents the lab experts on the front lines of COVID-19 testing—has been working with members of the White House Coronavirus Task Force to try to eliminate this roadblock.

AACC has partnered with leading data analytics firm, Edgeworth Analytics, to determine the full extent of these supply shortages and how they are changing as the pandemic progresses, in the hopes that this information can help guide the federal government’s response. So far, AACC and Edgeworth have surveyed clinical labs across the U.S. about this issue during three different time periods: May 1-24, June 1-5, and June 24-July 6. The results show a troubling trend—namely, that supply shortages have persisted over the last few months. In May, 58% of all labs surveyed reported problems getting supplies, a figure that only decreased to 46% by early July. Even more worrying is a rise in the number of labs that are unable to process all requested COVID-19 tests within a week because of supply shortages. In early July, 25% of respondents reported this problem, an uptick from 21% of respondents in May.

“We at AACC are deeply concerned that clinical labs continue to struggle with obtaining the supplies needed to meet our nation’s COVID-19 diagnostic testing demands,” said AACC president Dr. Carmen Wiley. “While we recognize the difficulty the federal government is encountering with this pandemic, we urge the Task Force to use the data from AACC’s survey as a jumping off point to investigate these ongoing shortages, and to use the authority of the federal government to obtain and allocate these vital supplies.”

Working with AACC, Edgeworth Analytics designed and conducted this survey and assessed the results. AACC invited the same group of labs to take the survey during all three time periods. This group included both hospital/public health labs and commercial/reference labs. During the May 1-24 period, 100 of these labs responded to the full survey; during the June 1-5 period, 33 labs responded; and during the June 24-July 6 period, 53 labs responded.

In response to the question about which supplies labs were having difficulty procuring, 24 labs responded during the June 24-July 6 period (as shown in Figure 2 above).

5 Comments on "Labs Still Do Not Have Supplies for COVID-19 Testing, AACC Survey Finds"