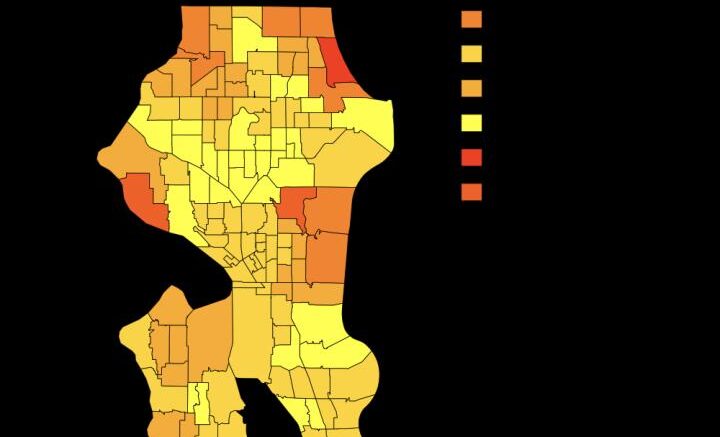 The coronavirus doesn't spread uniformly through a community, but in the world of disease modeling, many projections take a high-level approach to a geographic area, like a county or state, and forecast based on a general idea that a virus will take root and spread at an equal rate until it reaches its peak of infection.

A research team led by UC Irvine and the University of Washington has created a new model of coronavirus diffusion through a community. This approach, published Sept. 10 in the Proceedings of the National Academy of Sciences, factors in network exposure -- whom one interacts with -- and demographics to simulate at a more detailed level both where and how quickly the coronavirus could spread through Seattle and 18 other major cities.

The team used U.S. Census Bureau tract demographics, simulation techniques and COVID-19 case data from spring 2020 to estimate a range of days for the virus to spread within a given city.

The result: Some neighborhoods peak sooner than others. And in every city, the virus sticks around far longer than some might expect.

"The most basic takeaway from this research is risk. People are at risk longer than they think, the virus will last longer than expected, and the point at which you think you don't need to be vigilant means that it just hasn't happened to you yet," said co-author Zack Almquist, an assistant professor of sociology at the UW.

Almquist and the team took on their study with two basic premises: Account for the social and geographic connections within a tract that could affect the course of the virus; and assume no vaccine or other major intervention alters its path. Then, based on actual COVID-19 and demographic data, project a likely scenario for spread over time.

Take Seattle. The study's map of the city outlines each census tract and provides a color-coded range of days each tract could take to reach peak infection before the virus goes into a low remission. The overall range is vast, from neighborhoods with the fastest peak -- 83 days -- to those that take more than 1,000. That's more than three years, assuming there is no significant intervention to stem the spread.

In the study's model of Washington, D.C., census tracts also appear to reach peak infection rates at different times. Again, denser areas tend to peak sooner. But the network connections can cause "bursty" peak infection days, with some areas seeing early peak infections and others seeing it much later based on the neighborhoods' relative connections with each other, Almquist said.

Projecting the path of the virus can help estimate the impact on local hospitals. Researchers predicted this in several ways, such as modeling the number of cases per hospital over time and the number of days a hospital is at peak capacity.

The model of projected hospital cases shows how the geographic variations in the timing in peak COVID-19 infections could affect hospitals in different areas. Without outside intervention, some hospitals would remain at capacity for years, especially those farthest from major population centers.

These types of models are important because they provide a more detailed and nuanced prediction of an unknown like the novel coronavirus, said Almquist. Gauging how the virus might spread throughout a city and strain its hospitals can help local officials and health care providers plan for many scenarios. And while this study assumes no major interventions will rein in the virus, it's reasonable to believe the virus will linger to some degree, even with solutions such as a vaccine, according to Almquist.

"If you project these models for what it means over the country, we might expect to see some areas, such as rural populations, not see infection for months or even years before their peak infection occurs," Almquist said. "These projections, as well as others, are beginning to suggest that it could take years for the spread of COVID-19 to reach saturation in the population, and even if it does so it is likely to become endemic without a vaccine."