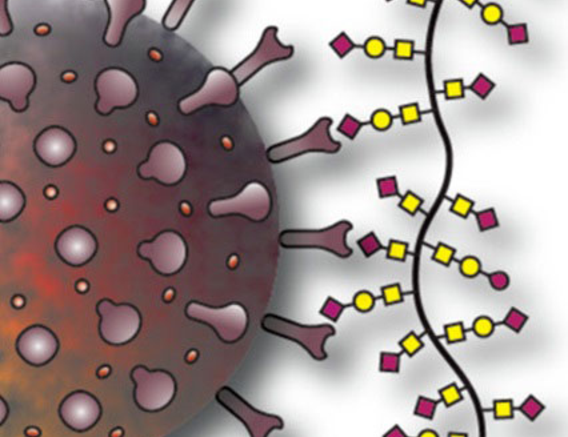 Specific glycans (red squares in the illustration) on mucins can bind to coronavirus spike proteins, which could prevent viruses in cough or sneeze droplets from spreading from surfaces. Adapted from ACS Central Science 2022, DOI: 10.1021/ acscentsci.1c01369

Early in the pandemic, many people fastidiously disinfected surfaces because laboratory studies predicted that SARS-CoV-2 could be easily transmitted in this way. Now, researchers reporting in ACS Central Science have found a possible explanation for why the predictions didn’t pan out: Sugar-decorated proteins in mucus could bind to the coronavirus on surfaces, keeping it from infecting cells. The findings could also hint at why some people are more vulnerable to COVID-19 than others.

Although experiments have shown that coronaviruses can persist on surfaces for days or weeks, it is now apparent that SARS-CoV-2 is much more likely to infect people through airborne droplets carrying the virus. The surface studies typically used viruses suspended in buffers or growth media, whereas in the real world, SARS-CoV-2 is coated in mucus when someone coughs or sneezes. With this in mind, Jessica Kramer and colleagues wondered if mucus components could explain the discrepancy between the lab predictions and reality. In addition to water, salts, lipids, DNA and other proteins, mucus contains proteins called mucins, which are heavily modified with sugar molecules known as glycans. To infect cells, the SARS-CoV-2 spike protein binds glycan molecules with sialic acid at their ends on the cell surface. So, the researchers wondered if the coronavirus also recognizes sialic acid-containing glycans in mucins. If the spike protein is already bound to glycans in mucus, perhaps it couldn’t bind to the ones on cells, they reasoned.

For safety reasons, the researchers chose to study a human coronavirus called OC43, which evolved relatively recently from a cow coronavirus and causes mostly mild respiratory infections. The team deposited droplets of the virus in buffer or growth medium supplemented with 0.1–5% mucins, which corresponds to the concentration range of mucins found in nasal mucus and saliva, onto a plastic surface and let the drops dry. Then, they rehydrated the viral residue and measured its ability to infect cells. In comparison to the buffer or growth medium alone, the solutions supplemented with mucins were dramatically less infectious. The team also tested steel, glass and surgical mask surfaces, finding similar results.

The researchers showed that, as the droplets dried, mucins moved to the edge and concentrated there in a coffee-ring effect, bringing the virus with them. This brought mucins and virus particles close together, where they could more easily interact. Cutting off sialic acid glycans from mucins with an enzyme eliminated viral binding and destroyed the glycoproteins’ protective effect. Because SARS-CoV-2, like OC43, binds to sialic acid glycans on cell surfaces, mucins would also likely reduce its infectivity, the researchers suspect. The levels and types of sugar molecules on mucins can vary with diet and certain diseases, which could possibly explain the vulnerability of certain people to COVID-19, they say.