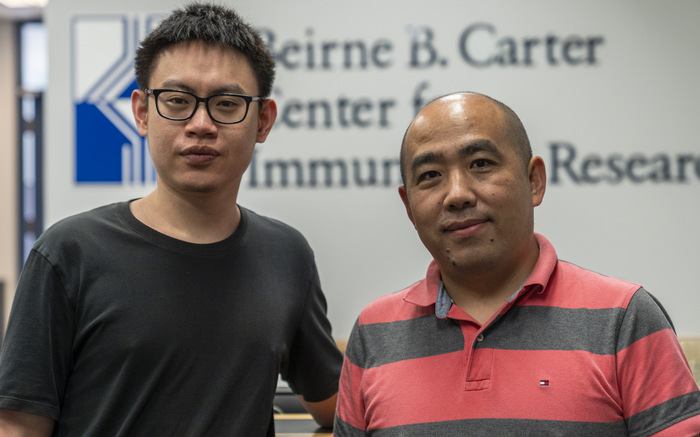 Those widely available COVID-19 vaccinations keeping the majority of the population free from serious illness will not be enough to stop the spread of the virus and its variants, new University of Virginia collaborative research indicates.

Just as science has begun to suspect, the shots will need a boost from a nasal spray.

“Our data suggest that an intranasal vaccine-boosting strategy will be critical to protect people against emerging variants of concern,” said Jie Sun, the Harrison Distinguished Teaching Professor of Medicine at UVA. Sun serves in the Division of Infectious Diseases and International Medicine and associate directs the University’s Carter Immunology Center.

Published Tuesday in Science Immunology, Sun and colleagues’ research fully documents for the first time the underperforming immune response in the airways of people with COVID-19 vaccinations compared to those with natural infection.

The leading vaccines in public use are called “mRNA vaccines” because they take inspiration from messenger ribonucleic acid, the delivery system that facilitates biological replication. But the mRNA in the vaccines is not derived from a live virus. Instead, the molecule is synthesized in a lab to resemble an invader, enough so that the body can recognize the real thing in the future. However, with these vaccines, “the message” now appears to be largely confined to the blood.

Bloodstreams get strongly ramped up by the vaccine, while the mucosal linings experience moderate or little neutralizing antibody response, the study found.

“The omicron variant almost completely escaped neutralization by mucosal antibodies in individuals who received mRNA vaccines and in previously infected individuals,” said Sun. “Our data showed that mRNA vaccination also did not induce sufficient tissue-residing cellular immunity in the airways, another arm of our immune system to prevent the entry of the virus into our bodies.”

Only the bodies of unvaccinated patients who were seriously ill put up a vigorous fight against the virus in both their airways and their bloodstreams, the researchers found – a less-than-ideal way of achieving a united front.

However, a separate component of the new research provides hope that vaccinations will one day soon provide complete coverage.

Mice that were administered a nasally delivered vaccine originating from adenovirus, a relative in the family of cold viruses that expresses the spike protein found in COVID-19, demonstrated “robust neutralizing antibody responses” in combination with mRNA vaccine shots.

“The nasal vaccine provides a mucosal antigen boost to the pre-existing memory of T and B cells that direct immune response, resulting in higher cellular and humoral immunity,” Sun explained.

The uptick was found not only in the bronchi of the lungs, but also as an improvement over the bloodstream’s normal vaccinated response.

And the response was “effective against the ancestral virus as well as the omicron variant,” he said.

The research further validates scientists’ suspicion that greater immunity to the coronavirus can be developed starting where the virus first takes root, the mucus membranes of the nose – perhaps stopping it cold.

In humans, Sun said, “We think the robust antibody responses in the respiratory tract would neutralize the virus immediately upon viral entry when the individual contracts the virus, preventing the establishment of viral infection and subsequent passing of the infection to others.”

Pharmaceutical labs are working on COVID-19 nasal vaccines, but to date, none has been approved for use. A spray would require a weakened version of the live virus. If the live virus is too weak, the spray won’t work. If it’s too strong, people will get sick and the virus will spread.

An adenovirus-based nasal vaccine has also yet to be approved for humans, mainly out of a fear of unwanted side effects. One of them could be Bell’s palsy, a condition that causes muscle weakness in the face. A study found a possible connection after people were vaccinated with an influenza nasal vaccine specially formulated to create a stronger immune response.

“For a nasal vaccine, we do need to be more careful about the safety profiles,” Sun said. “So I think we need a step-up trial from a mouse to human study in the U.S. A human trial has been performed in China already using nasal adenovirus spray, which suggests it is generally safe and can boost good immune responses, but mucosal immunity was not examined.”

Sun and colleagues plan to follow up on their research. As the first team to investigate respiratory mucosal memory with COVID-19, they identified that the body’s natural immune response to the virus caused permanent damage to the lungs in hospitalized, unvaccinated patients.

Their recent look at the immunized builds upon that research.

The research was conducted among several departments at UVA Health and in the UVA School of Medicine, as well as at Chung-Ang University (Korea), Indiana University, Ohio State University, the University of Pennsylvania, the Fred Hutchinson Cancer Research Center and the Mayo Clinic.