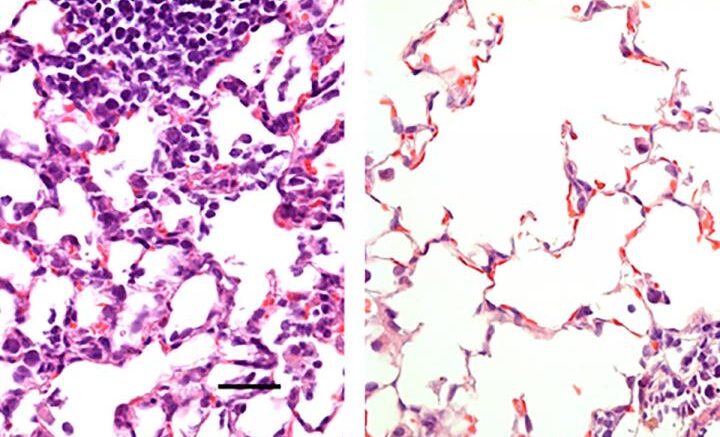 Scientists at Washington University School of Medicine in St. Louis have developed a vaccine that targets the SARS-CoV-2 virus, can be given in one dose via the nose and is effective in preventing infection in mice susceptible to the novel coronavirus. The investigators next plan to test the vaccine in nonhuman primates and humans to see if it is safe and effective in preventing COVID-19 infection.

The study is available online in the journal Cell.

Unlike other COVID-19 vaccines in development, this one is delivered via the nose, often the initial site of infection. In the new study, the researchers found that the nasal delivery route created a strong immune response throughout the body, but it was particularly effective in the nose and respiratory tract, preventing the infection from taking hold in the body.

"We were happily surprised to see a strong immune response in the cells of the inner lining of the nose and upper airway -- and a profound protection from infection with this virus," said senior author Michael S. Diamond, MD, PhD, the Herbert S. Gasser Professor of Medicine and a professor of molecular microbiology, and of pathology and immunology. "These mice were well protected from disease. And in some of the mice, we saw evidence of sterilizing immunity, where there is no sign of infection whatsoever after the mouse is challenged with the virus."

To develop the vaccine, the researchers inserted the virus' spike protein, which coronavirus uses to invade cells, inside another virus - called an adenovirus - that causes the common cold. But the scientists tweaked the adenovirus, rendering it unable to cause illness. The harmless adenovirus carries the spike protein into the nose, enabling the body to mount an immune defense against the SARS-CoV-2 virus without becoming sick. In another innovation beyond nasal delivery, the new vaccine incorporates two mutations into the spike protein that stabilize it in a specific shape that is most conducive to forming antibodies against it.

"Adenoviruses are the basis for many investigational vaccines for COVID-19 and other infectious diseases, such as Ebola virus and tuberculosis, and they have good safety and efficacy records, but not much research has been done with nasal delivery of these vaccines," said co-senior author David T. Curiel, MD, PhD, the Distinguished Professor of Radiation Oncology. "All of the other adenovirus vaccines in development for COVID-19 are delivered by injection into the arm or thigh muscle. The nose is a novel route, so our results are surprising and promising. It's also important that a single dose produced such a robust immune response. Vaccines that require two doses for full protection are less effective because some people, for various reasons, never receive the second dose."

Although there is an influenza vaccine called FluMist that is delivered through the nose, it uses a weakened form of the live influenza virus and can't be administered to certain groups, including those whose immune systems are compromised by illnesses such as cancer, HIV and diabetes. In contrast, the new COVID-19 intranasal vaccine in this study does not use a live virus capable of replication, presumably making it safer.

The researchers compared this vaccine administered to the mice in two ways -- in the nose and through intramuscular injection. While the injection induced an immune response that prevented pneumonia, it did not prevent infection in the nose and lungs. Such a vaccine might reduce the severity of COVID-19, but it would not totally block infection or prevent infected individuals from spreading the virus. In contrast, the nasal delivery route prevented infection in both the upper and lower respiratory tract -- the nose and lungs -- suggesting that vaccinated individuals would not spread the virus or develop infections elsewhere in the body.

The researchers said the study is promising but cautioned that the vaccine so far has only been studied in mice.

"We will soon begin a study to test this intranasal vaccine in nonhuman primates with a plan to move into human clinical trials as quickly as we can," Diamond said. "We're optimistic, but this needs to continue going through the proper evaluation pipelines. In these mouse models, the vaccine is highly protective. We're looking forward to beginning the next round of studies and ultimately testing it in people to see if we can induce the type of protective immunity that we think not only will prevent infection but also curb pandemic transmission of this virus."