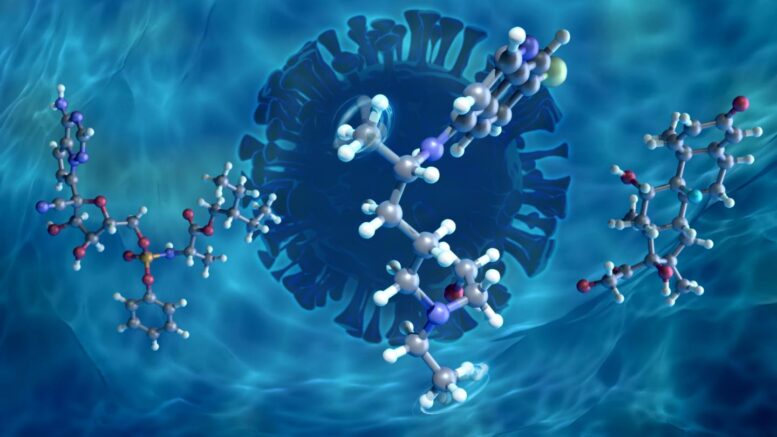 As the scientific community continues researching the novel coronavirus, experts are developing new drugs and repurposing existing ones in hopes of identifying promising candidates for treating symptoms of COVID-19.

Scientists can analyze the molecular dynamics of drug molecules to better understand their interactions with target proteins in human cells and their potential for treating certain diseases. Many studies examine drug molecules in their dry, powder form, but less is known about how such molecules behave in a hydrated environment, which is characteristic of human cells.

Using neutron experiments and computer simulations, a team of researchers from the Department of Energy's (DOE) Oak Ridge National Laboratory (ORNL) delved into how some of these drugs behave at the molecular scale when exposed to water. The scientists conducted this research using neutron scattering instruments at the ORNL Spallation Neutron Source (SNS).

They found that certain parts of the molecules were able to move more easily once hydrated. This factor could influence how efficiently a drug takes on shapes associated with different biological functions, such as binding to a target protein and inhibiting viral activity. The results of this project, now published in ACS Omega and the Journal of Physical Chemistry Letters, could help experts understand the mechanisms by which drug molecules have the potential to mitigate the impact of viral infection.

"The human body is approximately 60 percent water. When drugs are in our bodies and interacting with water molecules, they are not going to move the same as when they are in a crystalline state," said Matthew Stone, an ORNL instrument scientist involved with the study. "Having a fundamental understanding of how the drugs might act in human bodies could help scientists determine which molecules are effective against the virus."

The study analyzed three molecules: remdesivir, an antiviral drug developed to treat the Ebola virus disease; dexamethasone, a steroid commonly used for autoimmune and inflammation conditions; and hydroxychloroquine, an immunosuppressant drug created for preventing and treating malaria. The team's early work focused on hydroxychloroquine, when it was being investigated as a COVID-19 treatment, but as new candidates were identified by the medical community, the project shifted to studying remdesivir and dexamethasone.

The team specifically examined the drug molecules' methyl groups, which are functional groups consisting of one central carbon atom and three branching hydrogen atoms. Methyl groups are often included in drug molecules because they can significantly improve drug potency, a phenomenon known as the magic methyl effect. Some scientists believe this improvement occurs because methyl groups can impact how drugs bind to target proteins, dissolve in liquids, and are broken down by enzymes.

Using the BASIS, VISION, SEQUOIA, and CNCS spectrometers at SNS, the researchers measured methyl group dynamics within dry and variously hydrated drug samples. Each instrument provides a unique view into how molecules vibrate or change shape and how much energy these movements require. Combining these different data sets enabled the team to build a comprehensive picture of how these drug molecules behave.

"Using spectroscopy, we can look into how atoms are moving in a material. With this technique, we're trying to help build up a library of how these drug molecules work at the atomic scale," said ORNL instrument scientist and study co-author Timmy Ramirez-Cuesta.

Neutrons are uniquely suited for this research because they interact strongly with light elements like hydrogen, which are abundant in drug molecules, and their energy levels can be similar to the energies of moving atoms. The similarity allows neutrons to detect the energy associated with subtle atomic vibrations and rotations with a high degree of accuracy. "The SNS is extremely useful because the facility's instruments have unique specializations that cover different energy ranges," said Stone.

The researchers then relied on computer modeling to link certain molecular movements to specific energy peaks in their data, like identifying different musical instruments when listening to a song.

"When you measure the energy levels of molecular motions, at first you don't know exactly what specific movements are causing energy peaks. However, we can simulate molecular motions in a model and calculate the energy required for certain movements to happen," said Yongqiang Cheng, an ORNL instrument scientist involved with this research. "By aligning simulated energy peaks with measured energy peaks, you can better understand how a molecule is moving."

The results showed that exposing the drugs to water causes the molecules to become more disordered, similar to how a sugar cube starts to dissolve when wet. The researchers found that, when the drug molecules became more disordered as a result of hydration, the methyl groups required considerably less energy to rotate.

"Introducing the drug samples to water often caused the material to become more disordered in our study, and in this disordered state, the methyl groups could move more easily between configurations," said ORNL instrument scientist Alexander Kolesnikov and study co-author.

The findings suggest that analyzing drug candidates in a hydration-induced disordered state could offer more insight into drug molecule dynamics in human bodies.

"Many scientists study the crystalline structure of different drugs to better understand how they function, but we found, in reality, these molecules can behave quite differently," said Eugene Mamontov, an ORNL instrument scientist and corresponding author of the published studies.

Of course, the methyl group is just one part of these drug molecules, and more research is needed to better understand how these drugs might act in human cells. Additionally, to gain further insight into the potency of these drugs, scientists also need to study how their molecular motions change when interacting with target proteins.

The research team's next steps include examining other therapeutic candidates that have shown potential as COVID-19 treatments.

"This is a constantly evolving project, but our overarching aim is to use the strong spectroscopy expertise at ORNL to help scientists learn more about these drug molecules and get one step closer to finding effective solutions for treating this disease," said Cheng.

In addition to Stone, Ramirez-Cuesta, Cheng, Kolesnikov, and Mamontov, the team included ORNL instrument scientists Luke Daemen, Daniel Pajerowski, and Andrey Podlesnyak and Clifford G. Shull Fellow Matthew Ryder. The neutron experiments were performed by Mamontov for BASIS, Ramirez-Cuesta and Daemen for VISION, Stone and Kolesnikov for SEQUOIA, and Pajerowski and Podlesnyak for CNCS. The computer simulations were carried out by Cheng and Ryder.