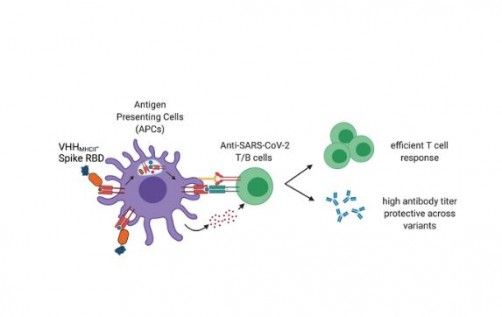 Shown at far left, the vaccine consists of a portion of the spike protein’s receptor-binding domain (RBD), shown in dark blue, attached to a single domain antibody-fragment that recognizes class II major histocompatibility complex (MHC) proteins, shown as orange ovals. These conjugates home to antigen-presenting cells (APCs), which then process and display the RBD to T and B cells. This leads to a robust immune response, eliciting both T cells and high titers of neutralizing antibodies that are protective across SARS-CoV-2 variants. Courtesy of Novalia Pishesha, Boston Children’s Hospital

Currently available COVID vaccines require cold storage and sophisticated manufacturing capacity, which makes it difficult to produce and distribute them widely, especially in less developed countries. A new type of vaccine would potentially be much easier to produce and would not need refrigeration, report researchers at Boston Children’s Hospital in the November 2 issue of PNAS.

The researchers, led by Hidde Ploegh, PhD, and first authors Novalia Pishesha, PhD, and Thibault Harmand, PhD, believe their technology could help fill global vaccination gaps and that the same technology could be applied to vaccines against other diseases.

In mice, the vaccine elicited strong immune responses against SARS-CoV-2 and its variants. It was successfully freeze-dried and later reconstituted without loss of efficacy. In tests, it remained stable and potent for at least seven days at room temperature.

Unlike current COVID-19 vaccines, the new design is completely protein-based, making it easy for many facilities to manufacture. It has two components: antibodies derived from alpacas, known as nanobodies, and the portion of the virus’s spike protein that binds to receptors on human cells.

“We could also attach the whole spike protein or other parts of the virus,” notes Pishesha. “And we can change the vaccine for SARS-CoV-2 variants quickly and easily.”

The nanobodies are the key part of the vaccine technology. They are specially designed to target antigen-presenting cells, critical cells in the immune system, by homing to class II major histocompatibility complex (MHC) antigens on the cells’ surface. This brings the business end of the vaccine — in this case, the segment of the spike protein — directly to the very cells that will “show” it to other immune cells, sparking a broader immune response.

Current COVID-19 vaccines stimulate production of the spike protein at the site in the body where they’re injected, and are presumed to stimulate antigen-presenting cells indirectly, says Ploegh. “But taking out the middleman and talking directly to antigen presenting cells is much more efficient,” he says. “The secret sauce is the targeting.”

Because the vaccine is a protein, rather than a messenger RNA like the Pfizer/BioNTech and Moderna vaccines, it lends itself much more to large-scale manufacturing.

“We don’t need a lot of the fancy technology and expertise that you need to make an mRNA vaccine,” says Harmand. “Skilled workers are currently a bottleneck for production of the COVID vaccine, whereas biopharma has a lot of experience producing protein-based therapeutics at scale.”

This could potentially enable production of the vaccine at many sites around the world, close to where it would be used. The team has filed a patent on their technology and now hopes to engage biotech or pharmaceutical companies to take their work into further testing and, eventually, a clinical trial.

“It may be that initial application is something else other than COVID-19,” says Ploegh. “This study was the proof of concept that our protein-based approach works well.”