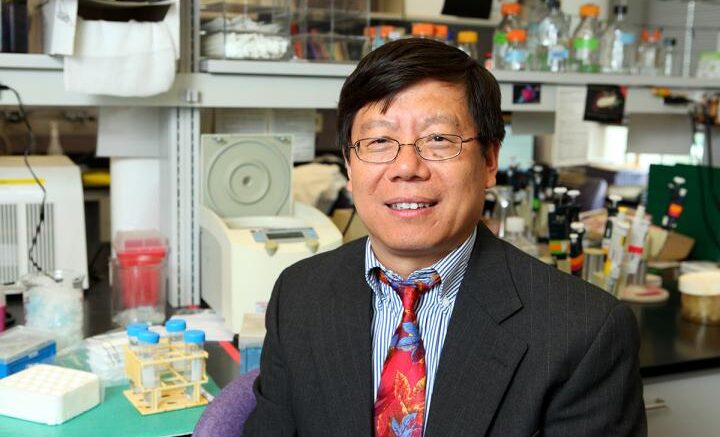 UIC's Lijun Rong is part of a team of UIC researchers who have identified a previously unknown site on filoviruses -- a type of virus, like Ebola, that causes hemorrhagic fever -- that could pave the way for improved treatments. Courtesy of Jenny Fontaine/UIC

Ebola and Marburg are among the most deadly viruses, with mortality rates from these infections ranging from 25% to 90%. While no drugs currently are available on the market to prevent infection from these viruses -- they belong to a category of viruses called filoviruses, which are known to cause hemorrhagic fever -- researchers have identified a few small drug molecules that can block filoviruses from infecting cells by occupying a single site on a glycoprotein in the virus.

These findings are reported in the journal PLOS Pathogens.

"We need to identify how these filoviruses get into cells as a means to help us identify or develop drugs that can prevent infection," said Lijun Rong, UIC professor of microbiology and immunology at the College of Medicine and a corresponding author of the paper. "Even though at the moment Ebola and Marburg are not in the news that often, having drugs in our arsenal in case of a flare-up is invaluable. These viruses also mutate constantly, so having a better understanding of how they work will let us develop next-generation viral inhibitors."

Rong's group and his collaborators, led by Rui Xiong, UIC research assistant professor of pharmaceutical sciences at the College of Pharmacy, identified the second glycoprotein binding site by pairing the virus with hundreds of different small drug molecules thought to possibly have an effect on viral entry into cells. Several of the drugs were able to prevent viral entry.

Through a series of experiments using molecular, biophysical and structural experimental techniques, they were able to look more closely at how these drugs were interacting with the virus. They found that the drugs were binding to a previously unknown site on the viral surface glycoprotein required for cell infection.

"The good news is that there are already drugs approved by the FDA that can bind to the new site we identified," Rong said. "If we can give drugs that bind to the site we newly identified and the site previously identified, it can help prevent viral infection with lower doses of each drug. Interfering with both sites on the viral surface glycoprotein, it also reduces the chances of the glycoprotein mutating to the point that it escapes the effect of the drug combination and is able to infect cells once again."

This research was partially supported by grant awards from the National Institutes of Health (R41AI12697, R42AI126971).

Be the first to comment on "New Drug Target for Ebola, Marburg Viruses"