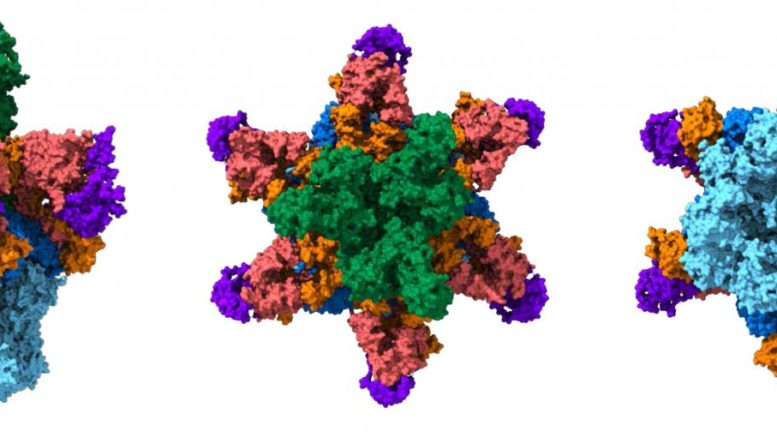 This is a model of the secretion system of Mycobacterium tuberculosis. At its center, the pore is clearly visible. This enables the nanomachine to excrete a large number of specialized effector proteins. Courtesy of Sebastian Geibel

Tuberculosis is a highly contagious infectious disease that is typically spread through aerosols and mainly affects the lungs. According to the World Health Organization (WHO), an estimated 1.7 million people die from such an infection worldwide every year. In addition, a quarter of the world's population carries a form of tuberculosis that lies dormant without symptoms for a long time, but can break out eventually.

During infection Mycobacterium tuberculosis, the main causative agent of tuberculosis, secretes a large number of effector proteins through type VII secretion systems - small nanomachines which are composed of proteins that reside in the cell envelope. The effector proteins are specialized in fighting the immune defense or enable the uptake of nutrients to ensure the bacterial survival in the host. How these central secretion systems work, is still poorly understood.

Scientists from the Julius-Maximilians-Universität Würzburg (JMU) and the Spanish Cancer Research Centre CNIO (Centro Nacional de Investigaciones Oncológicas) have now succeeded in deciphering the molecular architecture of these nanomachines. Dr. Sebastian Geibel, who heads a research group at the Institute of Molecular Infection Biology funded by the Bavarian Elite Network and who is also affiliated with the Rudolf Virchow Centre of the JMU, was in charge of this work. The scientists have published their work in the current issue of the journal Nature.

Over the past five years, the research group of Geibel's has worked intensively on the stable reconstitution of one of these secretion machines and the preparation of the sensitive sample for measurements on the cryo electron microscope, which requires the protein complexes to be shock frozen under defined conditions.

In collaboration with the research group of Oscar Llorca in Madrid, which computed three-dimensional maps of the protein complex using a sophisticated data processing strategy, the researchers from Würzburg were able to create a model of its molecular structure. The researchers were able to identify important elements of the nanomachine that form the transport pore as well as to locate elements that convert chemical energy into motion and thus drive the transport of effector proteins through the pore.

The findings of the researchers lead to a deeper functional understanding of Type VII secretion systems. In times of rising resistance of mycobacteria to the antibiotics in use and no effective vaccination against tuberculosis in place, the researcher provide an important basis for the development of novel antibiotics that target the assembly or function of the type VII secretion systems.