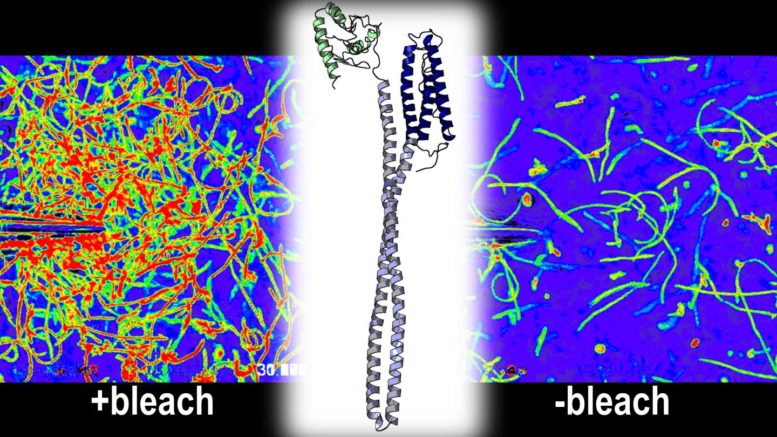 The bacterial stomach pathogen Helicobacter pylori swims toward a needle filled with bleach. The bacterium uses a protein called TlpD (center) to sense the bleach as an attractant. Courtesy of Arden Perkins

Researchers at the University of Oregon have uncovered a molecular mechanism by which the human stomach pathogen Helicobacter pylori is attracted to bleach, also known as hypochlorous acid or HOCI. The study revealed that H. pylori uses a protein called TlpD to sense bleach and swim toward it, and that the bacteria Salmonella enterica and Escherichia coli can use TlpD-like proteins to detect bleach in the environment.

The researchers propose H. pylori uses the protein TlpD to sense sites of tissue inflammation, which could help the bacteria colonize the stomach and perhaps locate damaged tissue and nutrients. The paper, "Helicobacter pylori senses bleach (HOCI) as a chemoattractant using a cytosolic chemoreceptor," appeared Aug. 29 in the journal PLOS Biology.

The health burden caused by H. pylori is particularly large, researchers say, because it infects about half the world's population with nearly 100 percent infection rates in some developing regions. The bacterium takes up residence inside small pockets in the stomach, called stomach glands, that are thought to shelter it from the hostile gastric environment.

H. pylori causes chronic inflammation and stomach ulcers. It is a major risk factor for stomach cancer, one of the most common forms of cancer worldwide.

"Part of the rationale for studying this particular protein is that we know the navigation system that Helicobacter pylori has is really important for the bacteria to be able to infect and cause disease," said lead author Arden Perkins, a postdoctoral fellow at the University of Oregon. "If we come to learn what the function of this protein is, there is potential that we might be able to disrupt its function with a new drug."

H. pylori, like most bacteria, use special proteins to sense chemicals in their environment. The process, known as chemotaxis, allows them to regulate their flagella to swim toward or away from compounds they encounter.

The research team set out to determine how bacteria respond to the presence of bleach, which is produced by white blood cells in the body and is a key part of how the immune system fights bacteria.

"It's important that we understand the protein machinery of bleach sensing," said study co-author Karen Guillemin, a professor of biology and member of the UO's Institute of Molecular Biology. "It turns out that this is not a machinery that is exclusive to Helicobacter pylori and it allows us insights into other bacteria that have similar proteins."

Work began 2.5 years ago to determine the molecular function of the TlpD protein, which the researchers knew was involved in regulating the bacteria's flagella. They knew TlpD was a sensor molecule but didn't know what it might be sensing. In order to get to the bottom of the uncharacterized protein's function, Perkins isolated the TlpD protein and two other proteins involved in transmitting the molecular signal to the flagella.

"Isolating the components of the molecular signaling system gave us a much clearer understanding of what was going on," Guillemin said.

Previous research had revealed that reactive oxygen species might be the compounds that were sensed by the TlpD protein, so Perkins tested different compounds, including hydrogen peroxide, superoxide and bleach. The surprising results showed that TlpD produced an attractant signal when exposed to bleach.

Although it seemed counterintuitive for the bacteria to be attracted to a noxious chemical, further studies using live bacteria confirmed that the bacteria are unharmed by and attracted to sources of bleach at concentrations produced by the human body.

Perkins and co-workers couldn't deny what they were seeing after repeatedly performing the experiment and controlling for different explanations.

"This project started from this really rigorous molecular insight, and then we progressed to thinking about what this means for the behavior of the bacteria," Guillemin said. "We were able to proceed with really strong confidence that the phenomenon we were studying made sense at a molecular level."

Normally, bleach produced during inflammation is effective at killing bacteria. But H. pylori is unusual in making its home in inflamed tissue for decades apparently without being eradicated by the bleach. The research team believes H. pylori may be attracted to bleach as a means of locating and persisting inside the stomach glands, which are full of white blood cells but serve as crucial reservoirs for the bacteria.

Surprisingly, the researchers found, the toxic compound produced by the white blood cells could be interpreted as an attraction signal by the invading bacteria.

"We know that in the course of its infection, the bacteria is able to live in inflamed tissue for years and years, so this result suggests that maybe part of the way it does that is by being attracted to inflamed tissue," Perkins said. "It's clearly evolved sufficient protections to be able to endure that environment even though there are potentially high concentrations of bleach there."

Researchers found TlpD-like proteins from Salmonella enterica and Escherichia coli are also able to detect bleach, indicating that bleach-sensing may be a previously unrecognized phenomena performed by many types of bacteria.

The research eventually could lead to new therapies to disrupt the ability of harmful bacteria to sense their environment and could have implications for reducing antibiotic resistance.

Typical antibiotics used clinically today kill or prevent bacteria from dividing by targeting things like the bacterial cell wall. As a result, bacteria face selective pressures to develop resistance to those kinds of drugs in order to survive.

In the case of Helicobacter pylori, approximately 30 percent of infections are resistant to antibiotic treatment. With a more thorough understanding of the mechanisms at work, Guillemin said, researchers may then be able to develop more effective means of combatting bacteria.

"It might be that there are less strong selective pressures for bacteria to overcome a drug that just makes them disoriented," Guillemin said. "By 2050 there's going to be pandemics of antibiotic-resistant bacteria, so there's a real need to think about new strategies."

2 Comments on "New Research Reveals That H. pylori is Attracted to Bleach"