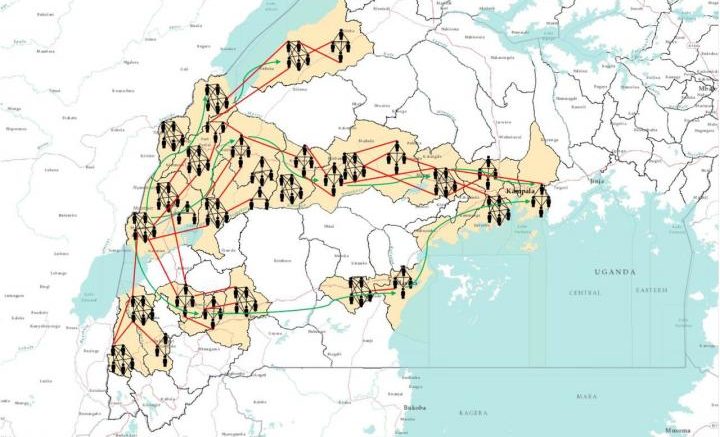 Kansas State University researchers have developed a multilayer temporal network model for how Ebola could spread in Uganda so health professionals can develop a risk assessment. They identified 23 districts at risk marked in beige. The human figures represent networks of constant contacts linked by black lines and temporary contacts linked by red lines. The green arrows represent the direction of human movement. Courtesy of Kansas State University

A new risk assessment model for the transmission of Ebola accurately predicted its spread into the Republic of Uganda, according to the Kansas State University researchers who developed it.

Caterina Scoglio, professor, and Mahbubul Riad, doctoral student, both in the Mike Wiegers Department of Electrical and Computer Engineering in the Carl R. Ice College of Engineering at Kansas State University; Musa Sekamatte and Issa Makumbi at Uganda Ministry of Health; and Felix Ocom with the World Health Organization in Uganda, published "Risk assessment of Ebola virus disease spreading in Uganda using a two-layer temporal network" in Scientific Reports with Nature Publishing Group on Nov. 5.

The paper describes a new model to better predict how diseases like Ebola spread. The model combines data of people's constant contacts -- such as family members and co-workers -- with their temporary contacts -- such as people in a market or encountered during travel. According to Scoglio, the model should be used as a risk assessment tool to prepare and distribute resources, but it was accurate in predicting how the spring outbreak of Ebola in The Democratic Republic of Congo would move into Uganda.

"This is very a new type of model," Scoglio said. "Since we consider movement data in addition to constant contacts, we saw that not only are the districts directly bordering Congo at risk but that the districts on the path to some important Ugandan destinations also are at risk."

In 2018, Scoglio and her collaborators worked with Ugandan officials to collect movement data to model disease progression and find areas most at risk. According to the model, the Kasese district was the highest risk area for an infected person to enter the country. The researchers used the model to create a 150-day simulation of possible disease progression in Uganda and produced a map of 23 Ugandan districts at risk.

The specific scenario used in the simulation was similar to how actual events in Uganda started. According to the Uganda Health Ministry's June 18 release, there were three confirmed cases of Ebola in travelers to Uganda -- all from one family that entered the country at the Kasese district border. Again in August, another confirmed case came through the Kasese district from Congo. According to Scoglio, Ugandan officials were prepared for this and were able to stop further spread into the country.

"The risk assessment maps can be used to allocate and distribute limited resources," Scoglio said. "Uganda has about 4,000 doses of the new Ebola vaccine. They are vaccinating health workers, communicating about how to prevent spreading diseases, and advising people to limit travel in high-risk areas. We have much respect and admiration for how Uganda has organized the preparedness and now the response."

The researchers used the simulation of Ebola in Uganda to test their model because there is a lot of traffic coming into the country from the Democratic Republic of Congo for health care, trading and refuge. Ebola is highly contagious through physical contact with an infected person and their bodily fluids.

Scoglio said that even though the real events in Uganda have aligned with the simulated model, the scenario should only be used to mitigate the risk.

"One very important point for the public to understand is the concept of risk and probability with these maps," Scoglio said. "It should not be interpreted that these red regions will be affected because that will cause panic in the population, but rather these are a guide for allocation of limited resources in regions that could be potentially affected if no mitigations are implemented."

This model may open a new era in infectious disease management, Scoglio said. She gives credit to Aram Vajdi, doctoral student in electrical and computer engineering at Kansas State University, for developing the framework for the theoretical model based on a multilayer temporal network and the Gillespie algorithm. Scoglio also praised Riad, who applied the data collected from Uganda and how Ebola was transmitted to create the risk assessment.

According to Scoglio, network models used for highly infectious disease risk assessment must be able to anticipate changes in human-to-human contacts -- unlike many other models, which are based mainly on constant contacts and constant movement flows. Using these models can help increase the effectiveness of preventive measures by targeting the most critical regions and can help decrease the risk of Ebola and other infectious diseases from spreading.

Be the first to comment on "New Transmission Model for Ebola"