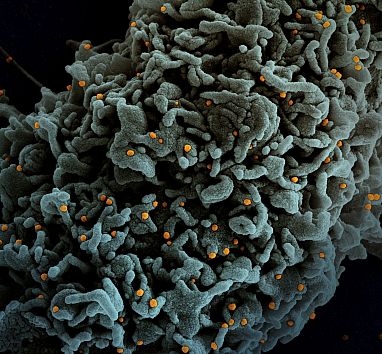 In investigational vaccine designed to protect against the B.1.351 SARS-CoV-2 variant has been administered as part of a new Phase 1 clinical trial evaluating the vaccine candidate’s safety and immunogenicity in adult volunteers. The vaccine, known as mRNA-1273.351, was developed by the biotechnology company ModernaTX, Inc., based in Cambridge, Massachusetts. The trial is led and funded by the National Institute of Allergy and Infectious Diseases (NIAID), part of the National Institutes of Health. The trial will enroll approximately 210 healthy adult volunteers at four clinical research sites in the United States that are part of the NIAID-funded Infectious Diseases Clinical Research Consortium (IDCRC).

“The B.1.351 SARS-CoV-2 variant, first identified in the Republic of South Africa, has been detected in at least nine states in the United States,” said NIAID director Anthony S. Fauci, M.D. “Preliminary data show that the COVID-19 vaccines currently available in the United States should provide an adequate degree of protection against SARS-CoV-2 variants. However, out of an abundance of caution, NIAID has continued its partnership with Moderna to evaluate this variant vaccine candidate should there be a need for an updated vaccine.”

Investigators from NIAID and Moderna co-developed the mRNA-1273 vaccine, which is currently authorized by the U.S. Food and Drug Administration for emergency use in the United States for the prevention of COVID-19 in adults 18 years of age and older. The vaccine is administered as two 100-microgram (mcg) doses 28 days apart. The vaccine uses lipid nanoparticles to deliver instructions to the body’s cells for making a stabilized version of the spike protein found on the surface of the SARS-CoV-2 virus. After the vaccination, the immune system detects the stabilized spike protein and begins building a response against the virus. The variant vaccine candidate developed by Moderna, mRNA-1273.351, differs from the currently-authorized Moderna vaccine in that it delivers instructions for making the SARS-CoV-2 spike that incorporates key mutations in the B.1.351 virus variant. In addition to the Phase 1 clinical trial, investigators at NIAID’s Vaccine Research Center are collaborating with Moderna to evaluate mRNA-1273.351 in animal models.

The trial will enroll people ages 18 years and older who already have received the mRNA-1273 vaccine, as well as people ages 18 through 55 years who have not received any COVID-19 vaccine. Approximately 60 volunteers who previously received mRNA-1273 as a participant in NIAID’s Phase 1 trial of mRNA-1273 (which began in March 2020) will enroll in the new variant Phase 1 trial. Approximately one year ago, these volunteers received two vaccinations of mRNA-1273 28 days apart at varying doses: 50 mcg, 100 mcg or 250 mcg. As part of the variant vaccine trial, these volunteers will be randomized to receive either a single booster vaccination of 50 mcg of mRNA-1273.351 (group 1A) or a single vaccination containing one 25-mcg dose of mRNA-1273 and one 25-mcg dose of mRNA-1273.351 (group 1B). The remaining participants from the March 2020 trial will be offered a booster shot of mRNA-1273 as part of a separate clinical trial protocol (for more information see clincialtrials.gov: NCT04283461).

The Phase 1 variant vaccine trial also will enroll approximately 150 volunteers ages 18 through 55 years who have not received any COVID-19 vaccine, have no known history of COVID-19 or SARS-CoV-2 infection, and do not have health conditions that are associated with an increased risk of severe illness from SARS-CoV-2 infection, such as cancer, heart conditions, type 2 diabetes mellitus, severe obesity or chronic kidney disease. These volunteers will be randomly assigned to one of eight cohorts:

The trial will evaluate the safety and reactogenicity of the vaccine candidate as well as its ability to induce an immune response. Reactogenicity can include injection site reactions like redness and pain as well as systemic reactions such as fever, headache, fatigue or muscle aches. Participants will be closely monitored for safety and will be asked to return to the study clinic for multiple follow-up visits between vaccinations and for additional visits during the year after their last vaccination. Participants also will be asked to provide blood samples at specified times throughout the trial. Scientists will use these samples to measure the immune response against circulating strains of SARS-CoV-2, including the B.1.351 variant.

An independent safety monitoring committee (SMC) will oversee the trial by regularly reviewing safety reports. The SMC can make a recommendation to the sponsor (NIAID) whether the trial should be halted, modified or terminated at any point.