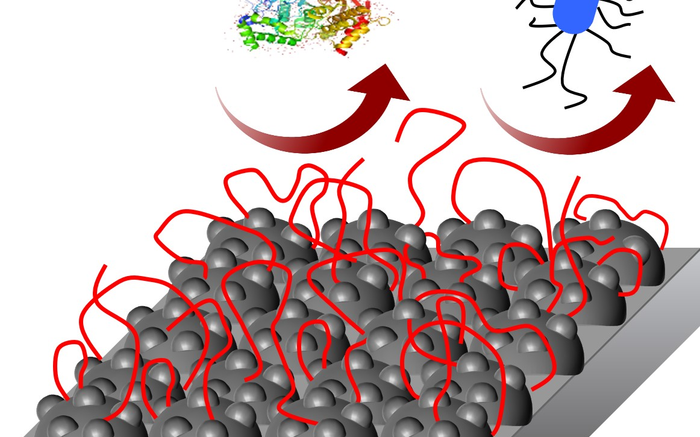 A new type of silver coating (illustrated above) could prevent bacteria from adhering to medical devices. Courtesy of Hossein Yazdani-Ahmadabadi

In a study in ACS Central Science, a team describes a new, long-acting silver-ion releasing coating that, in rats, prevents bacteria from adhering to implants and then kills them.

Sometimes medical care requires surgeons to implant a device, such as a tube to drain a wound or the bladder, or to deliver medication directly into the blood. However, bacteria can attach to and collect on the surfaces of these devices, creating a risk for dangerous infections. Researchers have been working to develop bacteria-repelling coatings, including those containing silver, which is known to kill microbes. However, their efforts have faced numerous challenges: Silver can also be toxic to human cells, and it’s difficult to make a coating that continually releases small amounts of the metal over long periods, for example. Dirk Lange and Jayachandran Kizhakkedathu wanted to identify a formula that could overcome these and other difficulties.

To develop a simple-to-use coating, the team screened many sets of ingredients that they could apply to a surface in a single step. The formula that worked the best included silver nitrate, dopamine and two hydrophilic polymers. This silver-based film-forming antibacterial engineered (“SAFE”) coating formed stable, silver-containing assemblies, which gradually released silver ions in lab tests.

When exposed over 28 days to eight of the most common species of bacteria that cause serious infections, this new coating recipe effectively kept the microbes at bay. It did so in a unique way: by both repelling the bacteria from the surface and then killing them with silver ions. To test SAFE’s effectiveness in a living animal, they coated a titanium implant with it, then placed the implant beneath the skin of rats. After a week, the researchers found that implants with the coating had dramatically fewer bacteria than those without it. In addition, there were no signs of toxicity to the rats’ tissues. The coating also appeared tough, showing little wear and tear after being rubbed and sterilized using harsh conditions. This combination of attributes is likely to make the coating useful in many types of medical devices and implants to prevent bacterial infection over the long-term, the researchers say.