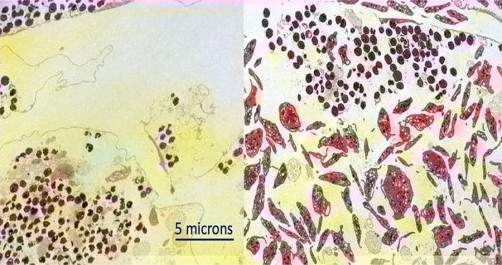 Despite continued improvements in antibiotics and hospital intensive care, staph sepsis — a bloodstream infection caused by Staphylococcus aureus bacteria — still causes severe illness or death in 20 percent to 30 percent of patients who contract it.

Rather than continue to throw more antibiotics at the problem, University of California San Diego researchers want to boost the other side of the equation: the patient’s own immune system.

The team recently discovered a battle that occurs between staph bacteria and platelets — blood cells known better for their role in clotting than in immune defense. In some sepsis cases, they found, the bacteria win out and platelet levels plummet. Patients with fewer platelets were more likely to die of staph sepsis than patients with higher platelet counts.

The study was published March 24, 2021 in Science Translational Medicine.

“In many cases, the antibiotics we give these patients should be able to kill the bacteria, based on lab tests, yet a significant number of patients are not pulling through,” said senior author Victor Nizet, MD, distinguished professor at UC San Diego School of Medicine and Skaggs School of Pharmacy and Pharmaceutical Sciences. “If we can reduce mortality in staph sepsis by 10 or 20 percent by arming or protecting the immune system, we can likely save more lives than discovering an additional new antibiotic that may still not cure the sickest patients.”

The study started with a group of 49 University of Wisconsin patients with staph sepsis. The team collected the patients’ blood, bacteria samples, and demographic and health information. To their surprise, it wasn’t white blood cell counts (immune cells) that correlated with patient outcomes — it was the platelet count. Low platelet counts, defined in this case as fewer than 100,000 per mm3 blood, were associated with increased risk of death from staph sepsis. Approximately 31 percent of patients with low platelet counts died from the infection, compared to less than 6 percent of patients with platelets above the threshold.

In laboratory experiments, the researchers worked out what’s likely happening: Platelets secrete antimicrobial peptides that help the immune system destroy staph bacteria. At the same time, staph release an alpha-toxin that’s detrimental to platelets. In addition to poking holes in platelets, the bacteria’s alpha-toxin convinces the blood cells to produce an enzyme that trims off sugar molecules that decorate their own surfaces. The platelet’s new look is recognized by another molecule in the liver called the Ashwell-Morell receptor, which pulls “bald” platelets out of circulation.

Once Nizet and team had an idea of what might be happening in the patients who are less likely to survive staph sepsis, they turned to mouse models of the disease to find ways to tip the balance of what they call the “toxin-platelet-receptor” axis back in favor of the human patient.

The researchers tested several classes of drugs known to be safe in humans and known to act on platelets. Most drugs they tested had no effect, but two drugs made a big difference. Ticagrelor blocks staph’s alpha-toxin so it can’t injure platelets or stimulate its sugar-removing enzyme. Oseltamivir inhibits the platelet sugar-removing enzyme so the cells don’t go bald and aren’t cleared by the liver, even when staph’s alpha-toxin is around.

Mice with staph sepsis and treated with either ticagrelor or oseltamivir maintained more platelets and had less bacteria in their blood. Ultimately, approximately 60 percent of treated mice survived 10 days following infection, compared to 20 percent of untreated mice.

Side effects of these medications may include nausea, diarrhea and nosebleeds, and ticagrelor may cause uncontrollable bleeding. While new clinical trials specifically designed to test the drugs’ safety and efficacy for patients with staph sepsis would be ideal, Nizet said there’s little financial incentive for pharmaceutical companies to do so with an already profitable drug.

“Discovering a new drug is tremendously expensive and takes many, many years,” said Nizet, who is also faculty lead for the Collaborative to Halt Antibiotic-Resistant Microbes (CHARM) at UC San Diego. “But if we look around at what we already have, what we already know to be safe, we may find many opportunities to improve patient outcomes.”

Sepsis can be caused by several types of bacteria in addition to staph, including Streptococcus pyogenes, Klebsiella, E. coli and Pseudomonas aeruginosa. According to the Centers for Disease Control and Prevention, each year at least 1.7 million adults in the U.S. develop sepsis and nearly 270,000 die as a result. One in three patients who die in a hospital has sepsis. And it’s one of the costliest of all diseases — in 2013, for example, the Department of Health and Human Services reported that sepsis management added up to more than $24 billion in hospital expenses, or 13 percent of total U.S. hospital costs.