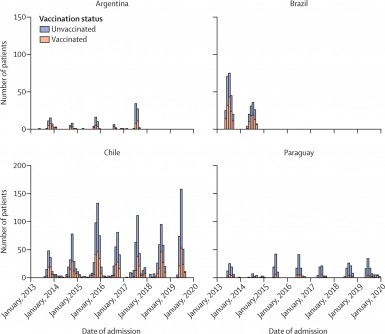 Distribution of influenza-associated hospitalizations from 2013 to 2019, by participating country and influenza vaccination status. Courtesy of The Lancet Infectious Diseases

An international team of researchers has demonstrated that among patients hospitalized for influenza, those who were vaccinated had less severe infections, including reducing the odds for children requiring admittance to an intensive care unit by almost half.

In addition, the researchers found that deaths among hospitalized adults, 65 or older, who had been vaccinated were 38% lower compared to those who had not been vaccinated.

“A common complaint about influenza vaccine is that they are typically 40 percent to 60 percent effective against infection -- or the ‘what’s the point?’ complaint. So it is important to note that although everyone in this study was hospitalized, vaccinated individuals were less likely to be severely ill or die, suggesting that you are likely to have far less severe consequences if vaccinated,” said Dr. Annette Regan, UCLA Fielding School of Public Health assistant professor of epidemiology and lead author of the peer-reviewed research, published this week in the October edition of The Lancet Infectious Diseases. “This is an important point, especially in light of the upcoming influenza season coupled with ongoing COVID-19 activity, both this season and into the future.”

The study – “Severity of influenza illness associated with seasonal influenza vaccination among hospitalized patients in four South American countries” – is the product of an international team of researchers from the United States, Argentina, Brazil, Chile, and Paraguay, and drew on data from all four South American countries over a period of seven years. Data were obtained through the Network for the Evaluation of Vaccine Effectiveness in Latin America and the Caribbean, influenza (REVELAC-i) which is coordinated by the Pan American Health Organization (PAHO).

“Although several studies have reported drops in influenza illness following influenza vaccination, the results have focused predominantly on adults in the United States, and this study aimed to evaluate the severity of influenza illness by vaccination status in a broad range of age groups, and across multiple South American countries,” said Dr. Marta Von Horoch, a co-author who serves as coordinator of the National Immunization Program in Paraguay. “We were very pleased to work with our partners in the U.S. and across the continent, and these findings demonstrate, quite clearly, the importance of influenza vaccination for children and adults, no matter where they live.”

The study – the first-ever on this scale in South America - examined influenza-related hospitalization rates and outcomes across all four countries from 2013-19. Specifically, the analysts reviewed the outcomes for some 2,747 patients hospitalized with confirmed influenza virus infection, in three age groups – children aged 6–24 months, adults aged 18–64 years, and adults aged 65 years or older.

Given the reality that vaccination rates have fallen, in the U.S. and globally during the COVID-19 pandemic, including among children, the findings should help make clear the benefits of timely, pro-active immunization campaigns to the public, the researchers said.

“With influenza season approaching this winter and influenza vaccines now available, these results highlight the importance of getting vaccinated for flu for anyone six months of age or older – as CDC recommends,” Regan said. “It is critical that healthcare providers and the public understand the risks of missing out on vaccinations – it is so much better to prevent a serious illness than to suffer through it, for the patient and everyone in their community.”