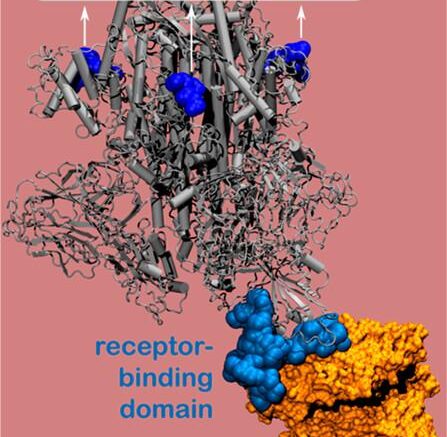 Leveraging this discovery, the researchers designed a negatively charged molecule to bind to the positively charged cleavage site. Blocking this site inhibits the virus from bonding to the host cell.

"Our work indicates that blocking this cleavage site may act as a viable prophylactic treatment that decreases the virus' ability to infect humans," said Northwestern's Monica Olvera de la Cruz, who led the work. "Our results explain experimental studies showing that mutations of the SARS-CoV-2 spike protein affected the virus transmissibility."

The research was published online last week in the journal ACS Nano.

Made up of amino acids, SARS-CoV-2's polybasic cleavage sites have remained elusive since the COVID-19 outbreak began. But previous research indicates that these mysterious sites are essential for virulence and transmission. Olvera de la Cruz and Qiao discovered that polybasic cleavage site is located 10 nanometers from human cell receptors -- a finding that provided unexpected insight.

"The function of the polybasic cleavage site has remained elusive," Olvera de la Cruz said. "However, it appears to be cleaved by an enzyme (furin) that is abundant in lungs, which suggests the cleavage site is crucial for virus entry into human cells."

With this new information, Olvera de la Cruz and Qiao next plan to work with Northwestern chemists and pharmacologists to design a new drug that could bind to the spike protein.

The research, "Enhanced binding of SARS-CoV-2 spike protein to receptor by distal polybasic cleavage sites," was supported by the U.S. Department of Energy (award number DE-FG02-08ER46539), the Sherman Fairchild Foundation and the Center for Computation and Theory of Soft Materials at Northwestern University.