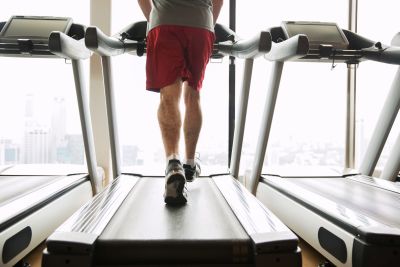 A pair of Mayo Clinic studies shed light on something that is typically difficult to see with the eye: respiratory aerosols. Such aerosol particles of varying sizes are a common component of breath, and they are a typical mode of transmission for respiratory viruses like COVID-19 to spread to other people and surfaces.

Researchers who conduct exercise stress tests for heart patients at Mayo Clinic found that exercising at increasing levels of exertion increased the aerosol concentration in the surrounding room. Then also found that a high-efficiency particulate air (HEPA) device effectively filtered out the aerosols and decreased the time needed to clear the air between patients.

"Our work was conducted with the support of Mayo Cardiovascular Medicine leadership who recognized right at the start of the pandemic that special measures would be required to protect patients and staff from COVID-19 while continuing to provide quality cardiovascular care to all who needed it," says Thomas Allison, PhD, director of Cardiopulmonary Exercise Testing at Mayo Clinic in Rochester. "Since there was no reliable guidance on how to do this, we put a research team together to find answers through scientific testing and data. We are happy to now share our findings with everyone around the world." Dr. Allison is senior author of both studies.

To characterize the aerosols generated during various intensities of exercise in the first study, Allison's team set up a special aerosol laboratory in a plastic tent with controlled airflow. Two types of laser beam particle counters were used to measure aerosol concentration at the front, back and sides of a person riding an exercise bike. Eight exercise volunteers wore equipment to measure their oxygen consumption, ventilation and heart rate.

During testing, a volunteer first had five minutes of resting breathing, followed by four bouts of three-minute exercise staged with monitoring and coaching to work at 25%, 50%, 75% and 100% of their age-predicted heart rate. This effort was followed by three minutes of cooldown. The findings are publicized online in CHEST.

"In a real sense, I think we have proven dramatically what many suspected ? that is why gyms were shut down and most exercise testing laboratories closed their practices. Exercise testing was not listed as an aerosol-generating procedure prior to our studies because no one had specifically studied it before. Exercise generates millions of respiratory aerosols during a test, many of a size reported to have virus-carrying potential. The higher the exercise intensity, the more aerosols are produced," says Allison.

The follow-up study led by Allison focused on how to mitigate the aerosols generated during exercise testing by filtering them out of the air immediately after they came out of the subject's mouth. Researchers used a similar setup with the controlled airflow exercise tent, particle counter and stationary bike, but added a portable HEPA filter with a flume hood.

Six healthy volunteers completed the same 20-minute exercise test as the previous study, first without the mitigation and then with the portable HEPA filter running.

Also, a separate experiment tested aerosol clearance time in the clinical exercise testing laboratories by using artificially generated aerosols to test how long it took for 99.9% of aerosols to be removed. Researchers performed the test first with only existing heating, ventilation and air conditioning, and then with the addition of the portable HEPA filter running.

"Studying clearance time informed us of how soon we could safely bring a new patient into the laboratory after finishing the test on the previous patient. HEPA filters cut this time by 50%, allowing the higher volume of testing necessary to meet the clinical demands of our Cardiovascular Medicine practice," says Allison.

"We translated CDC (Centers for Disease Control and Prevention) guidelines for aerosol mitigation with enhanced airflow through HEPA filters and showed that it worked amazingly well for exercise testing. We found that 96% plus or minus 2% of aerosols of all sizes generated during heavy exercise were removed from the air by the HEPA filter. As a result, we have been able to return to our practice of performing up to 100 stress tests per day without any recorded transmission of COVID in our exercise testing laboratories," says Allison.