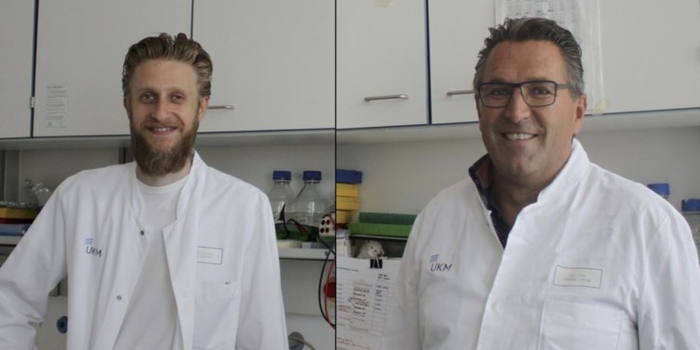 Lead author Dr. André Schreiber (left) and professor Stephan Ludwig have found a new type of dual action for an anti-Covid 19 drug candidate. This might provide the basis for a broadly effective medication.

A research team led by professor Stephan Ludwig, a virologist at the Institute of Virology at the University of Münster, has found a new dual attack mode of action while working on the development of a drug candidate against SARS-CoV-2 infections. This could constitute the basis for a broadly effective drug to fight Covid 19. The data, which have now been published in the journal Cellular and Molecular Life Sciences, provided the basis for the approval issued by the German Institute of Drugs and Medicinal Products for a clinical study currently being worked on.

The drug can not only inhibit the proliferation of SARS-CoV-2 viruses in cells, but also reduce the exaggerated immune response which represents a serious problem in severe cases of Covid.

“In the results we have published, we have been able for the first time to show such a dual action for an anti-Covid 19 agent,” explains Ludwig. The team is collaborating with researchers at the Universities of Würzburg and Tübingen, the German Primate Centre in Göttingen, and the Atriva Therapeutics start-up established by scientists of the Universities of Münster, Tübingen and Gießen.

The active agent in question, called Zapnometinib or ATR-002, which was originally under development as anti-flu medication, was effective in a variety of cell culture models – including activity against all tested variants of SARS-CoV-2, which also implies a broad applicability in facing up to any coming variants in the future.

“Positive results from the still ongoing clinical study in humans might already lead to an emergency approval this year for a new, broadly effective Covid-19 medication. The benefit is clear,” says Ludwig.