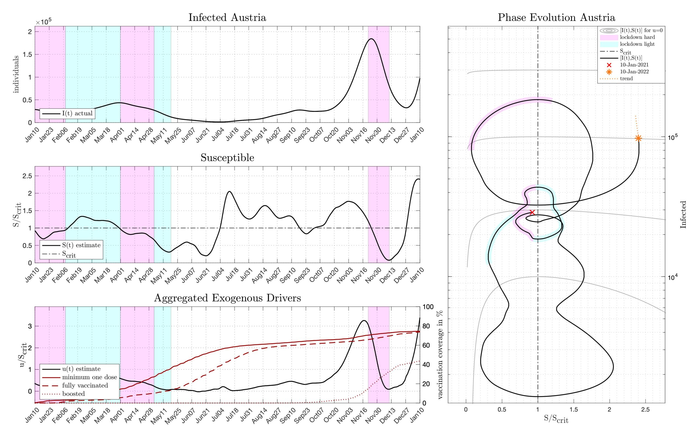 Researchers at TU Wien have published a new method that can be used to easily and robustly predict the susceptibility of the population to infection as a result of a viral mutation based solely on officially available data. The course of a pandemic is determined by so-called exogenous drivers. These are, for example, the changing social behavior of the population, mobility or lockdowns. In most cases, however, the effects of these factors are unknown and therefore seriously complicate the analysis and prediction of the highly dynamic infection event. With the new method, these exogenous drivers can also be determined easily and in real time. As a result, quantitative effects of lockdowns, for example, can also be predicted.

More accurate epidemiological state estimation combined with the determination of the unknown exogenous drivers also enables much more reliable forecasting. With its recent work published in the Journal of Nonlinear Dynamics, the team shows how the method from nonlinear control theory can be applied to common epidemiological compartment models, allowing accurate forecasts of essential quantities such as incidence or hospital occupancy. The research team sees the new "tool" as a scientific support for decision makers and colleagues.

The new approach was developed by a team led by professor Stefan Jakubek at the Institute of Mechanics and Mechatronics at TU Wien in cooperation with researchers at MedUni Vienna. The work of two students at TU Wien, Johanna Bartlechner and Oliver Ecker, played a key role. They provide with a completely new approach -- from the perspective of control and process automation combined with medical expertise. They use the method for quantitative real-time analysis and prediction of important variables in the pandemic, specifically hospital and intensive care unit occupancy.

A look at the pandemic's past proves its reliability: "We evaluated our methods using data from different countries over the past few months, and the accuracy achieved significantly exceeded our expectations," explains Bartlechner.

As part of the team at TU Wien, she analyzed not only Austria but also other countries such as South Africa, Denmark, Switzerland and the United Kingdom.

"Many factors that significantly influence the number of cases or occupancy of intensive care beds are difficult or impossible to quantify and are characterized by strongly nonlinear dynamics," her colleague Oliver Ecker emphasizes. For example, what the methodology reveals additionally and in real time: How does a new viral variant change the probability of a hospital stay? How effective are government interventions such as lockdowns?"