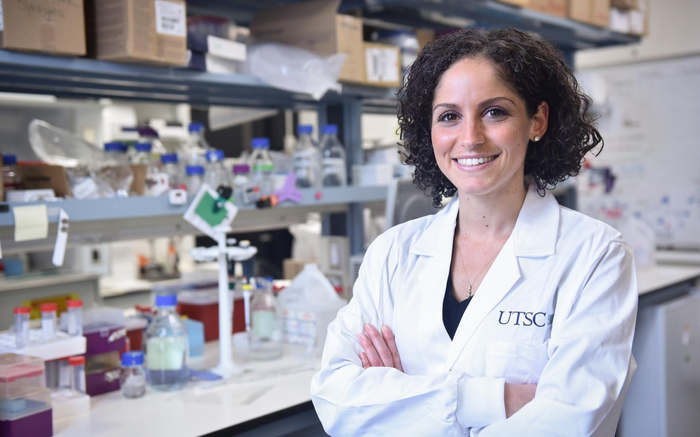 Christina Guzzo conducted her research in the viral immunology lab at U of T Scarborough that focuses partly on HIV. Courtesy of Ken Jones

The same lightbulbs used in offices and public spaces can destroy coronaviruses and HIV, according to a new study from U of T Scarborough.

Researchers killed both viruses using UV-LED lights, which can alternate between white light and decontaminating ultraviolet (UV) light. With a cheap retrofit, they could also be used in many standard lighting fixtures, giving them a “unique appeal” for public spaces, says Christina Guzzo, senior author of the study.

“We’re at a critical time where we need to use every single possible stop to get us out of this pandemic,” says Guzzo, an assistant professor in the department of biological sciences. “Every mitigation strategy that can be easily implemented should be used.”

“If you're able to kill these spores, then you can reasonably say you should be able to kill most other viruses that you would commonly encounter in the environment,” says Guzzo, principal investigator at the Guzzo Lab.

Within 20 seconds of UV exposure, the spores’ growth dropped by 99 percent.

The researchers then created droplets containing coronaviruses or HIV, to mimic typical ways people encounter viruses in public, such as from coughing, sneezing and bleeding. The droplets were then exposed to UV light and placed in a culture to see if any of the virus remained active. With just 30 seconds of exposure, the virus’ ability to infect dropped by 93 per cent.

Upon testing the viruses at different concentrations, they found samples with more viral particles were more resistant to the UV lights. But even with a viral load so high Guzzo calls it “the worst-case scenario,” infectivity dropped 88 per cent.

Though it wasn’t included in the study, Guzzo and her students also compared UV light to two heavy duty disinfectants used in lab research. They found the lights were similarly effective in their ability to deactivate viruses.

“I was really surprised that UV could perform on the same level of those commonly used lab chemicals, which we regard as the gold standard,” she says. “That made me think, ‘Oh, my gosh, this is a legitimate tool that's really underutilized.’”

Balance UV's pros and cons with clever use, researchers say

While the lights still left a small percentage of the virus viable, Guzzo references the “Swiss cheese model” of defense against COVID. Every strategy to fight the spread has its holes, but every layer is another chance to stop straggling virus particles.

Repeated exposure to UV light is key to catching those missed particles – fortunately, it’s as easy as flipping a switch. It’s also simpler to change a lightbulb than an air filtration system. Guzzo notes that UV-LEDs are cheap and could be easy to retrofit in existing light fixtures, and that the bulbs are long-lasting and simple to maintain.

“You could disinfect in a way that wouldn’t be infringing on people’s enjoyment of that everyday ‘normal’ life that they long for,” Guzzo says.

The lights also benefit from automation. A standardized, germicidal dose of light can be delivered each time, while the process of wiping down spaces with disinfectants leaves room for human error. Chemicals and waste from these disinfectants also end up in watersheds and landfills as hands are washed and wipes thrown away.

But the lights aren’t harmless, and there’s a reason for wearing sunscreen and sunglasses – UV radiation damages nucleic acid, and repeated, prolonged exposure is harmful. That’s why Guzzo says the lights should be used when public spaces are empty, such as vacated buses that have finished their routes, or empty elevators travelling between floors. Escalator handrails could be continuously disinfected by putting UV lights in the underground part of the track, cleaning it with each rotation.

Safe Antivirus Technologies, Inc., a Toronto-based start-up company that partnered with Guzzo for the study, is developing unique UV-LED lighting modules. With motion sensors, the lights automatically switch to UV light when a room is empty, then turn back to regular light with movement.

Funded by the Natural Sciences and Engineering Research Council (NSERC) Alliance COVID-19 Grant and published in Virology, this study highlights UV-LEDs as a tool that could be used beyond the pandemic, ideally to help prevent another.

“Worldwide events like the COVID-19 pandemic, as terrible as they are, hopefully can still be learned from,” Guzzo says. “One thing we learned is that this is an underutilized tool we should think more about implementing.”