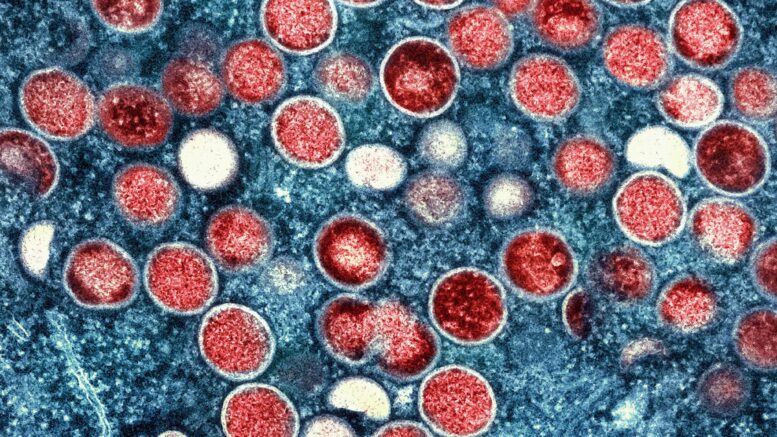 During the currently evolving outbreak of monkeypox cases outside of known endemic areas, transmission is mainly driven by close physical contact with symptomatic people. While virus transmission between humans has been described previously, data on environmental contamination of surfaces are rare.

Nörz, et al. swabbed surfaces in the immediate and adjacent rooms of two hospitalized monkeypox patients in Germany. The patients’ isolation rooms were separated from the ward corridor by anterooms, where hospital staff put their personal protective equipment on and off.

Contamination with up to 105 viral copies/cm2 on inanimate surfaces was estimated by PCR and the virus was successfully isolated from surfaces with more than 106 copies.

The authors emphasize that there currently are no definite data on what dose of virus leads to infection with monkeypox in humans. However, assumptions are that it requires a significantly higher dose to trigger infection than variola virus.

Nörz et al. hence stress that “despite high contamination with up to 105 cp/cm2 as well as the successful recovery of monkeypox virus from samples with a total of >106 copies, our findings do not prove that infection can occur from contact with these surfaces." Additionally, detecting viral DNA by PCR “cannot be equated with infectious virus”.

Prevention of virus spread from symptomatic patients should be individually adapted. Based on their findings, the authors conclude that “regular disinfection of frequent hand and skin contact points during the care processes additional to regular room cleaning and surface disinfection using products with at least virucidal activity against enveloped viruses can reduce infectious virus on surfaces and thereby risk of nosocomial transmission."