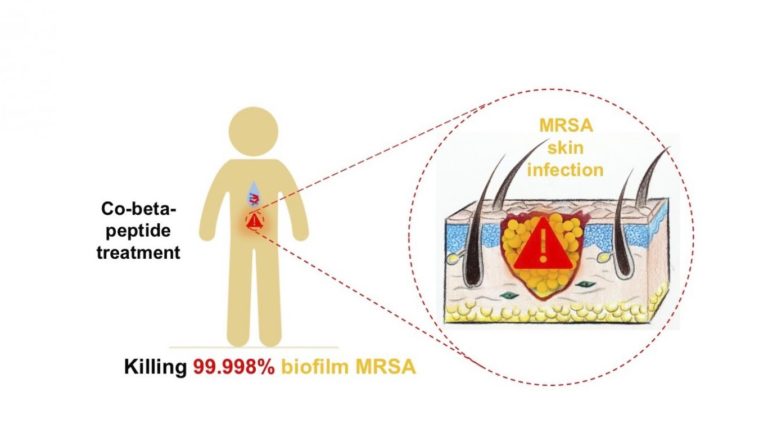 The co-beta peptide treatment is shown to eradicate biofilm bacteria such as MRSA, a particularly difficult form of bacteria to treat. Courtesy of Singapore-MIT Alliance for Research and Technology (SMART)

Researchers from Singapore-MIT Alliance for Research and Technology (SMART), MIT's research enterprise in Singapore, and Nanyang Technological University (NTU) have designed an antimicrobial polymer that can kill bacteria resistant to commonly used antibiotics, including the superbug Methicillin-resistant Staphylococcus aureus (MRSA). The breakthrough can pave the way for the development of medicine to which bacteria have a significantly slower rate of developing resistance, and help prevent hundreds of thousands of deaths each year caused by drug-resistant bacteria.

The new polymer is explained in a paper titled "Enantiomeric glycosylated cationic block co-beta-peptides eradicate Staphylococcus aureus biofilms and antibiotic-tolerant persisters" published last month in leading science journal Nature Communications. It was jointly published by a group of scientists at NTU and AMR, and led by Dr. Mary Chan-Park, SMART AMR principal investigator and professor at NTU's School of Chemical and Biomedical Engineering, and Dr. Kevin Pethe, associate professor at the Lee Kong Chian School of Medicine at NTU. AMR, the Antimicrobial Resistance Interdisciplinary Research Group (IRG) is a part of SMART, MIT's research enterprise in Singapore. SMART is funded by the National Research Foundation of Singapore (NRF) and the Campus for Research Excellence and Technological Enterprise (CREATE) to identify and conduct research on critical problems of societal significance. The AMR IRG is a unique translational research and entrepreneurship program that aims to solve the growing threat of resistance to antimicrobial drugs.

Increasing resistance to antimicrobial medicine is a cause for serious concern with at least 700,000 deaths each year caused by drug-resistant infections and diseases, according to a recent World Health Organisation report. In the United States alone, there is an antibiotic resistant infection acquired every 11 seconds, while a related death occurs every 15 minutes. While alpha-peptides have long been used to treat resistant bacteria such as MRSA, they tend to be rather unstable or toxic in the body. So for the first time, NTU and SMART researchers tested the use of beta-peptides to fight such bacteria in living beings. Designed for stability, the innovative new polymer degrades slowly in the body, giving it more time to work. Importantly, it has little to no toxicity impact.

Innovative medical research like the new co-beta-peptide is a crucial step towards preventing the staggering number of deaths from persistent and resistant bacteria. AMR also has plans to test the use of this polymer for curing MRSA-affected livestock. This is a growing issue globally, with up to 50% of pig herds in parts of Europe affected by the virus. The new drug will be particularly beneficial to farm workers as the virus has been detected in 20-80% of workers in MRSA-positive herds.

While the next step for the research is to test the polymer on animals infected by MRSA in pig farms, the researchers are also preparing to have the drugs tested in clinical trials for use for the public.

"This is a promising new approach to combating antimicrobial resistance that hasn't been done before," said Pethe. "The toxicity and proof-of-concept studies have shown that this can be on the drug development pathway as it shows good potency and low toxicity and we look forward to having this developed as a topical drug for humans."

Currently, AMR is looking for potential partners for further development of the antimicrobial polymers, particularly for human use.