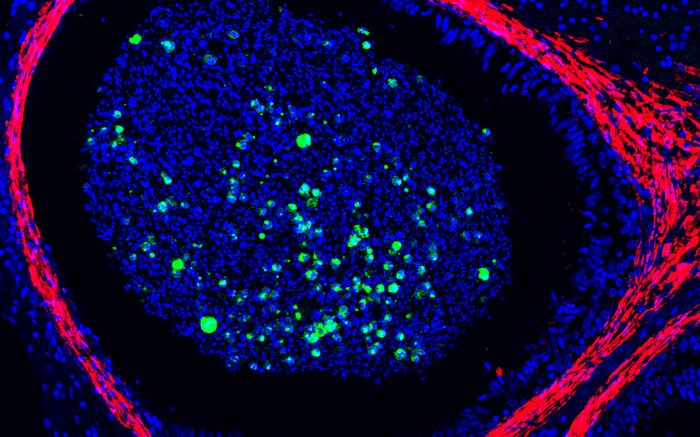 Immunofluorescence staining demonstrates monkeypox virus (green) can be detected in the epididymal lumina (red), the site of sperm maturation and storage, of a crab-eating macaque with acute monkeypox infection. Nuclei were counterstained blue. Courtesy of Dr. Xiankun Zeng, USAMRIID

For the first time, scientists have detected monkeypox virus in the testes of macaques during the acute phase of infection, according to research published online today in the journal Nature Microbiology. In addition, the team found preliminary evidence of persistent infection in two animals that survived challenge with the virus. Their results highlight the potential for sexual transmission of the virus in humans.

The ongoing 2022 monkeypox outbreak has been linked to sexual contact in patients with laboratory confirmed infection. As the virus can be transmitted through direct contact with bodily fluids and skin lesions, understanding the biology of monkeypox infection of the testes, and virus shedding in semen, has substantial public health implications.

Investigators at the U.S. Army Medical Research Institute of Infectious Diseases, or USAMRIID, performed a retrospective analysis of monkeypox virus infection in archival tissue samples from crab-eating macaques—a widely used nonhuman primate model for studying the disease and evaluating the efficacy of medical countermeasures, such as vaccines and treatments, against monkeypox.

“We examined tissue samples obtained during both the acute phase of the disease, when infection is at its peak, and the convalescent phase, when infection is gradually subsiding,” explained senior author Xiankun Zeng, PhD, of USAMRIID. “We detected monkeypox virus in interstitial cells and seminiferous tubules of the testes, as well as the epididymal lumina, which are the sites of sperm production and maturation.”

Importantly, said Zeng, the team also found preliminary evidence of persistent monkeypox virus infection in two convalescent crab-eating macaques that survived challenge with the virus. Using histological analysis to microscopically analyze the disease course in tissue samples, the USAMRIID team discovered that while monkeypox virus was cleared from most organs—and from healed skin lesions—during convalescence, it could be detected for up to 37 days post-exposure in the testes of the macaques.

USAMRIID investigators, led by Zeng, had previously demonstrated that Ebola, Marburg, Nipah, and Crimean-Congo hemorrhagic fever viruses can persist in certain organs of nonhuman primate survivors where the immune system is suppressed. These immune privileged sites, which are similar in humans, include the eyes, brain, and testes.

While close contact through sexual activity has been associated with the spread of monkeypox virus in the current global epidemic, it was unclear whether the virus replicated in the testes or was transmitted via semen.

“Our data provide evidence that monkeypox virus may be shed into semen during both acute and convalescent stages of the disease in crab-eating macaques,” said Zeng. “It seems plausible, therefore, that human transmission in convalescent male patients might occur via semen.” The authors also noted that persistent virus may be cleared over time.

Because this was a retrospective study using archival tissues, virus isolation in semen was not possible, said Jun Liu, Ph.D., the paper’s first author. Further studies are now needed to understand the origins, dynamics and implications of viral DNA shed in semen, as well as to confirm whether semen from convalescent monkeypox patients contains infectious virus—especially after skin lesions heal.

In addition, according to the authors, the crab-eating macaque model may not fully reflect monkeypox in humans. The animals demonstrate a more severe and lethal disease than that observed in humans, and the incubation period in the animals is shorter. Furthermore, this study used samples from animals exposed to different viral isolates than the strain currently circulating.