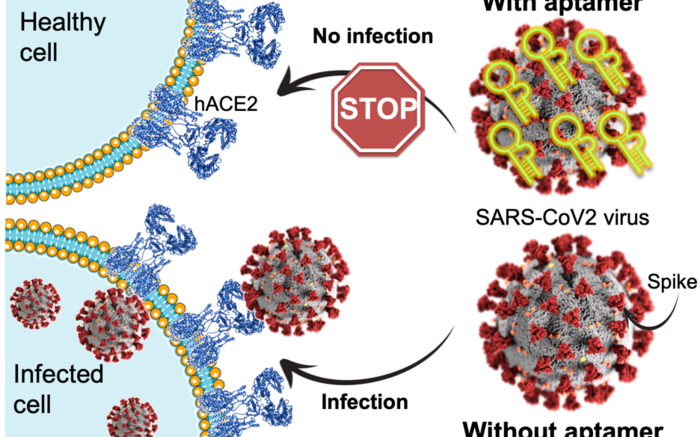 The spike protein on the surface of SARS-CoV-2 virus (marked in red) recognizes the hACE2 protein (marked in blue) that protrudes from healthy human cells in the throat and lungs. In this way, the spike protein acts like a key that allows the virus to invade the cell and use its machinery to reproduce itself. The newly developed RNA aptamer (marked in yellow) binds the spike protein very strongly and blocks it ability to recognize ACE2, thereby preventing further infection. Courtesy of Julián Valero, Aarhus University

A research team at Aarhus University has developed a new molecule that attaches to the surface of SARS-CoV-2 virus particles. This attachment prevents the virus from entering human cells and spreading the infection.

The newly developed molecule belongs to a class of compounds known as RNA aptamers and it is based on the same type of building blocks that are used for mRNA vaccines. This makes them much cheaper and easier to manufacture than the antibodies that are currently used to treat Covid-19 and to detect viral infection using rapid antigen tests.

An aptamer is a piece of DNA or RNA that folds into a 3D structure that can recognize a specific target molecule of interest. By attaching itself to the virus surface, the RNA aptamer prevents the spike protein from serving as a key that allows the virus to enter a cell. Hence, the RNA aptamer is not a new type of vaccine but a compound that can potentially stop the virus from spreading in the body once someone is exposed to the virus.

The efficient binding to SARS-CoV-2 virus also means that the aptamer can be used to test for covid-19 infection.

"We have started testing the new aptamer in rapid tests and we expect to be able to detect very low concentrations of the virus" says professor Jørgen Kjems from Aarhus University who is the main author of the article which has just been published in PNAS.

Studies in cell culture show that the aptamer works against the previous variants of coronavirus that the researchers had the opportunity to test.

“Since we submitted the article for peer review, we have continued our studies and been able to show that it also recognizes the delta variant. Now we are waiting for samples of the newly identified variant, omicron, so we can test whether the aptamer also recognizes that,” says Kjems, who emphasizes that the results with the delta variant have not yet been peer reviewed and published.