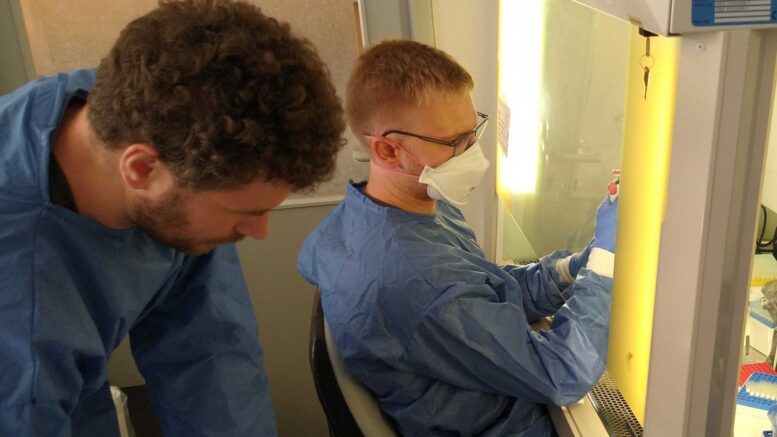 Researchers Stephan Riesenberg (left) and Lukas Bokelmann (right) in the lab at the Max Planck Institute for Evolutionary Anthropology.

Quantitative real-time polymerase chain reaction (qPCR) is the most widely used diagnostic method to detect RNA viruses such as SARS-CoV-2. However, it requires expensive laboratory equipment and global shortages of reagents for RNA purification has increased the need to find simple but reliable alternatives. One alternative to the qPCR technology is RT-LAMP (reverse transcription loop-mediated isothermal amplification). This test amplifies the desired target sequences of the virus at a constant temperature, using minimal equipment compared to qPCR. In 2020, it was adapted to the detection of SARS-CoV-2. It was also shown that instead of a swab, which many people find unpleasant, it can be performed on gargle lavage samples.

First author Lukas Bokelmann and colleagues have now developed an improved colorimetric RT-LAMP assay, called Cap-iLAMP (capture and improved loop-mediated isothermal amplification), which extracts and concentrates viral RNA from a pool of gargle lavage samples. After a short incubation, the test result -- orange/red for negative, bright yellow for positive -- can be interpreted visually or by using a freely available smartphone app.

The improved testing method outperforms previous similar methods. "Cap-iLAMP drastically reduces false positives and single infected samples can be detected in a pool among 25 uninfected samples, thus reducing the technical cost per test to only about 1 Euro per individual", says senior author Stephan Riesenberg, a researcher at the Max Planck Institute for Evolutionary Anthropology. "Our method overcomes problems associated with standard RT-LAMP and could also be applied to numerous other pathogens."