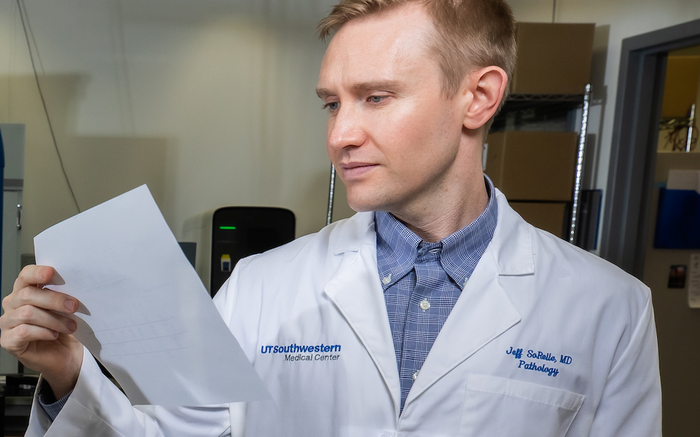 Last year, pathologist Jeffrey SoRelle, MD, and colleagues developed CoVarScan, a rapid COVID-19 test that detects the signatures of eight hotspots on the SARS-CoV-2 virus. Now, after testing CoVarScan on more than 4,000 patient samples collected at UT Southwestern, the team reports in Clinical Chemistry that their test is as accurate as other methods used to diagnose COVID-19 and can successfully differentiate between all current variants of SARS-CoV-2.

“Using this test, we can determine very quickly what variants are in the community and if a new variant is emerging,” said Dr. SoRelle, assistant professor of pathology and senior author of the study. “It also has implications for individual patients when we’re dealing with variants that respond differently to treatments.”

The testing results at UT Southwestern’s Once Upon a Time Human Genomics Center have helped public health leaders track the spread of COVID-19 in North Texas and make policy decisions based on the prevalence of variants. Doctors have also used the results to choose monoclonal antibodies that are more effective against certain strains infecting critically ill COVID-19 patients.

While a number of other tests for COVID-19 exist, they generally detect either a fragment of SARS-CoV-2 genetic material or small molecules found on the surface of the virus, and don’t provide information to identify the variant. In addition, many researchers worry that these tests aren’t accurate in detecting some variants – or may miss future strains. To determine which variant of COVID-19 a patient has, scientists typically must use whole genome sequencing, which is time-consuming and expensive, relying on sophisticated equipment and analysis to spell out the entire RNA sequence contained in the viruses.

In early 2021, SoRelle and his colleagues at UT Southwestern wanted to track how well current tests were detecting emerging variants of SARS-CoV-2. But they realized that sequencing a lot of specimens would not be timely or cost-effective, so they designed their own test, working in the McDermott Center Next Generation Sequencing Core, part of the Eugene McDermott Center for Human Growth and Development directed by Helen Hobbs, M.D., Professor of Internal Medicine and Molecular Genetics.

CoVarScan hones in on eight regions of SARS-CoV-2 that commonly differ between viral variants. It detects small mutations – where the sequence of RNA building blocks varies – and measures the length of repetitive genetic regions that tend to grow and shrink as the virus evolves. The method relies on polymerase chain reaction (PCR) – a technique common in most pathology labs – to copy and measure the RNA at these eight sites of interest.

To test how well CoVarScan works, SoRelle’s team ran the test on more than 4,000 COVID-19-positive nasal swab samples collected at UT Southwestern from April 2021 to February 2022 – from patients both with and without symptoms. The tests were validated with the gold-standard whole genome sequencing, and the results were used by doctors to choose treatments in some critically ill COVID-19 patients.

Compared to whole genome sequencing, CoVarScan had 96% sensitivity and 99% specificity. It identified and differentiated Delta, Mu, Lambda, and Omicron variants of COVID-19, including the BA.2 version of Omicron, once known as “stealth Omicron” because it did not show up on some tests designed to detect only the Omicron strain.

“A common critique of this kind of test is that it requires constant adjustment for new variants, but CoVarScan has not needed any adjustment in more than a year; it is still performing very well,” said SoRelle. “In the future, if we did need to adjust it, we could easily add as many as 20 or 30 additional hotspots to the test.”

SoRelle plans to continue developing CoVarScan as a commercial test and has a pending patent application based on this work.