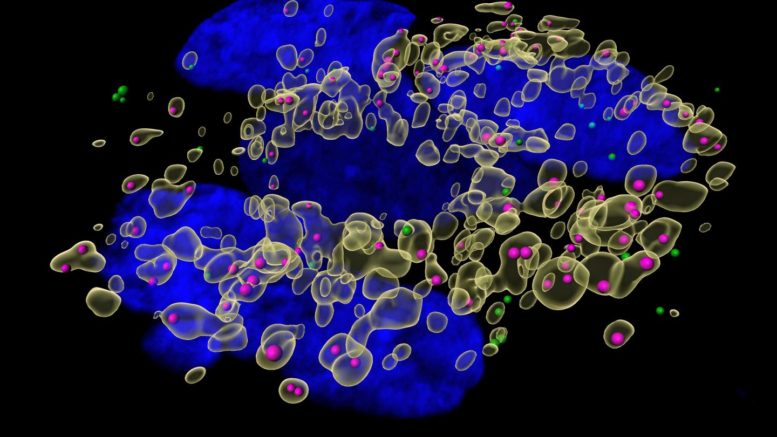 Hepatitus A virus particles (pink) trapped in lysosomes (yellow intracellular organelles), unable to initiate replication in the cytoplasm of cells due to UCGC enzyme being knocked out. Courtesy of Maryna Kapustina, PhD, UNC School of Medicine

How hepatitis A virus (HAV) manages to enter liver cells called hepatocytes and initiate infection had remained a mystery for fifty years until now. University of North Carolina School of Medicine researchers designed experiments using gene-editing tools to discover how molecules called gangliosides serve as de facto gatekeepers to allow the virus entry into liver cells.

The research, published in Nature Microbiology, has revealed gangliosides as a key player in HAV and has led to several other questions, such as how exactly viral RNA transitions between different compartments in human liver cells to replicate and cause disease.

"Discovering that gangliosides are essential receptors for HAV infection adds an interesting plot twist to the hepatitis A story," said senior author Stanley Lemon, MD, professor of medicine and microbiology at the UNC School of Medicine and member of the UNC Institute for Global Health and Infectious Diseases. "Gangliosides are structurally similar across mammalian species, unlike proteins, which helps explain cross-species transmission of ancient hepatoviruses. Understanding what helps a virus jump from one animal species to another is incredibly important, as evidenced so plainly by the current Covid-19 pandemic."

HAV was discovered nearly 50 years ago, and although there is a vaccine, there is no treatment. The virus still infects more than 1.4 million people globally each year, and in recent years has been causing increasing numbers of hepatitis cases in the United States, some fatal. Many people experience very mild or no symptoms, especially children. Patients with symptoms, which can last eight weeks and sometimes longer, often experience nausea, vomiting, diarrhea, jaundice, fever, and abdominal pain. After initial infection, 10 to 15 percent of infected individuals experience a recurrence of symptoms during the first six months. Acute liver failure is rare, but more common in elderly people.

HAV infects people through mechanisms similar to other viruses; it interacts with receptor molecules on the surface of human cells to gain entry. Knowing the receptor for a virus not only helps researchers understand how the virus enters cells, but also creates opportunities to design antivirals to block the interaction to prevent or treat disease.

Among the five known hepatitis viruses that cause acute or chronic liver disease in humans, receptors have been identified for hepatitis C virus and hepatitis B virus. For hepatitis A, the identity of the receptor remained elusive. The black sheep of the picornavirus family, it uniquely exists in two modes: as nonenveloped (naked) viruses (nHAV), comprised of a protein shell called a capsid surrounding an RNA genome; or as 'quasi-enveloped' viruses (eHAV), in which capsids containing the viral genome are cloaked inside host cell membranes.

Once inside the liver, eHAV is released from infected hepatocytes to circulate in the blood, whereas naked nHAV particles are shed in feces. Both virus types are infectious. Being cloaked with host-derived membranes gives eHAV an advantage in evading antibody responses, while the naked virion is extraordinarily stable and spreads readily in the environment. But how did each virus get into liver cells and the blood in the first place?

Years ago, the human protein TIM1 was reported to be a receptor for HAV. The gene that encodes this protein even bears the official name HAV cellular receptor 1 (HAVCR1). But recent studies in Lemon's laboratory showed that cells lacking TIM1 still allow HAV infection.

To find a more likely culprit for the receptor, Anshuman Das, PhD, a postdoc in the Lemon lab at the time of this research and now at Duke University., used CRISPR-Cas9 gene editing to knock out approximately 20,000 genes in cultured cells to find which human genes are essential for the virus to invade. They identified five particular genes, all of which were required by the virus. Turns out, these genes encode enzymes or transporters that make possible the synthesis of gangliosides. (Transporters are molecules that traffic chemicals across channels inside cells.)

Gangliosides are sugary fatty acid molecules. The enzyme ceramide glucosyltransferase creates gangliosides. And the gene UGCG encodes for that enzyme.

"UGCG was the lead culprit of the five genes that lit up our screen using CRISPR-Cas9," Lemon said.

The researchers then knocked out UGCG, which prevented HAV infection. They also treated liver-derived cells with a chemical inhibitor of ceramide glucosyltransferase to prevent both eHAV and nHAV infection.

The researchers then injected synthetic HAV RNA directly into cells to discover that the viral RNA replicated well, suggesting that gangliosides were required for entry of the virus into cells, but not needed for it to make copies of its genome, or new virus particles, once it gets into cells.

Subsequent experiments revealed that - in the absence of gangliosides - both naked and quasi-enveloped HAV particles do in fact get part way into the cell, but they end up getting stuck in a compartment called the lysosome. Viral replication does not occur. When the researchers added back gangliosides, the accumulated viruses used the gangliosides to exit the lysosome and continue their invasion of the cell, ending up releasing their genomes into the cell cytoplasm where the virus then began to replicate.

"This means gangliosides are essential for a late-step entry of HAV into cells," said Anshuman Das, PhD, a postdoc in the Lemon lab at the time of this research and now at Duke University. "They function as true receptors."

Although questions remain, the researchers say that understanding the role of gangliosides may open up new avenues for prevention and possibly even treatment of hepatitis A.

The National Institutes of Health funded this research.