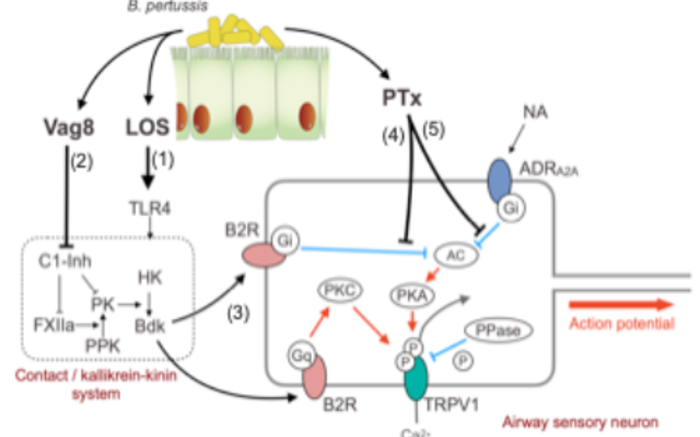 Commonly known as whooping cough, pertussis is a respiratory disease that results from infection with the bacterium Bordetella pertussis. This ailment often affects children and is characterized by a severe and persistent cough. However, this symptom has been extremely difficult to replicate in animal models. Described in a recent article published in mBio, a group led by researchers at Osaka University successfully established a mouse model that can reproduce the cough and used it to investigate the elusive molecular mechanisms of pertussis.

The burdensome cough is described as paroxysmal coughing – fits of violent coughing that can often affect the patient’s ability to breathe. Yet, the lack of an available animal model has prevented researchers from fully understanding how the infection induces this cough and despite there being an available vaccine to prevent pertussis the bacterium has begun to adapt to it. Therefore, the Osaka University group aimed to identify the mechanism governing the cough to facilitate the development of treatment methods for those with active disease.

“We inoculated mice with the bacteria through their noses,” says lead author of the study Yukihiro Hiramatsu. “A classical strain, called B. pertussis 18323, induced the cough most efficiently. Interestingly, each strain’s ability to cause coughing did not correlate with its capacity to colonize the tracheas and lungs, suggesting other mechanistic factors were at play.”

The researchers first examined pertussis toxin (PTx), because it was previously suggested to play a role in the coughing. A strain deficient in PTx did not induce coughing in their mouse model. However, inoculating the mice with purified PTx did not result in coughing, implying other bacterial factors are required. To identify them, the team screened various mutant B. pertussis strains in their lab. They discovered that a strain deficient in Vag8, another virulence factor, induced less coughing than the wild-type strain. Additionally, lipooligosaccharide (LOS), which is part of the bacteria outer membrane, also contributed to the effects. Treating the bacterial specimens with an antibiotic called polymyxin B, which removes LOS, resulted in a significantly lower cough-inducing ability.

“Various functional experiments suggested that there were two components in addition to PTx involved in cough production,” explains senior author Yasuhiko Horiguchi. “The results of this work suggested one was heat-stable while the other could be degraded by heat, which helped identify them as Vag8 and LOS.”

Mechanistically, the team determined that LOS induces a molecule called bradykinin, which sensitizes an ion channel called TRPV1 and results in the cough reflex. Vag8 further contributes to this signaling by blocking the system that inhibits bradykinin production. In addition, PTx interferes with intrinsic mechanisms that inhibit TRPV1.

“These three molecules act together to exacerbate bradykinin and TRPV1 signaling that ultimately causes the coughing,” describes Hiramatsu.

The team’s work is extremely significant, as they not only developed the first mouse model of pertussis, but also identified the specific bacterial factors responsible for inducing the debilitating coughing. This will undoubtedly be crucial data for the development of therapeutic methods targeting whooping cough.

The research, “The mechanism of pertussis cough revealed by the mouse-coughing model,” was published in mBio at DOI:https://doi.org/10.1128/mBio.03197-21