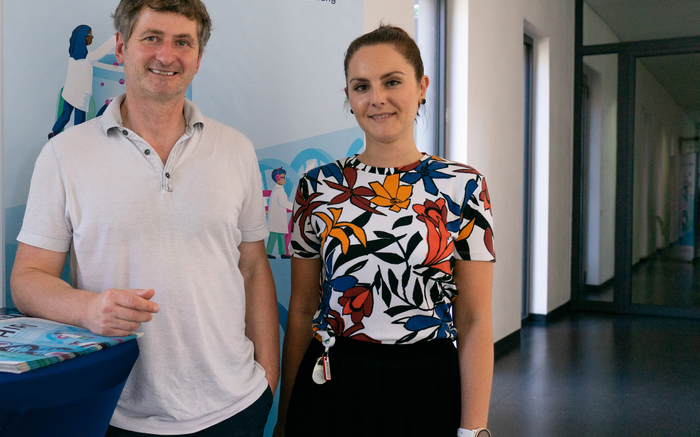 In the fight against the Covid-19 pandemic, mRNA-based vaccines have impressively demonstrated their potential. Using this technology, scientists were able to rapidly develop and bring to market vaccines against SARS-CoV-2 that have been extremely effective at protecting millions of people against severe disease progression of COVID-19 or even death. However, RNA-based medicine can be used to combat more than just viruses. Among others, it can also be considered as a candidate for a new type of antibiotics that can be used to treat bacterial infections in a tailored manner.

Which prerequisites these active agents need to fulfil and how they work in the bacterium – this has been investigated by researchers from the University of Würzburg (JMU). Teams from the Institute of Molecular Infection Biology (IMIB) and the Helmholtz Institute for RNA-based Infection Research (HIRI) were involved. They present the results of their work in the current issue of Nucleic Acids Research.

“The number of antibiotic-resistant bacterial strains is growing worldwide; treatments with conventional active agents are failing more and more. We therefore urgently need novel drugs to combat these pathogens in a targeted and effective manner.” This is how professor Jörg Vogel describes the background of the work that has now been published. Vogel is the chair of molecular infection biology I at JMU and Director of HIRI as well as the corresponding author of this study.

Programmable mRNA antibiotics could be the solution to this problem. The strategy is simple: “We introduce short chains of bases into bacteria that are designed to exactly match specific genes,” explains Vogel. When these fragments bind to the corresponding mRNA of the gene of interest, they abrogate protein production and, ideally, the bacterium dies as a result.

In science, this approach is known as “antisense technology”. The structure of those active agents is a mirror image of a gene, enabling them to effectively block it. The first drugs that work via this principle are already on the market, such as those for treatment of the consequences of spinal muscular atrophy or hepatitis C infection. However, mRNA antibiotics have been confined to the laboratory so far.

In their study, the scientists from Würzburg focused on bacterial strains of the type “uropathogenic Escherichia coli (UPEC)”. In the vast majority of cases, these bacteria cause a urinary tract infection in about one in a two women once in their lifetime. The excessive use of antibiotics during recent decades has led to the development of resistances to current therapeutics in many of these bacteria, particularly complicating treatment of frequently occuring recurrent urinary tract infections.

The research teams involved aimed at answering three central questions. First: Are the designed active agents (particularly, antisense peptide nucleic acids that target mRNAs of essential bacterial genes) specific? In other words, do they actually block only one specific bacterial gene? Or do they possibly also affect other mRNAs? The answer is clear: “Our results show that the applied base pairs only block the gene of interest,” says Vogel.

Second: How does the bacterium react to the translocation of these RNA antibiotics into the cell? Answer: Bacteria show a stress response, and thus, unfortunately, not as was desired. This is mainly due to the fact that antisense peptide nucleic acids are comparatively large in size. The stress therefore occurs primarily when these biomolecules cross the bacterial membrane.

However, there is good news with regard to the answer to question three: Is it possible to make these “base pair snippets” smaller? Yes, it is. “Until now, scientists have assumed that between nine and 14 base pairs are necessary to prevent any non-specific binding to other genes,” explains Vogel. The published results now show that nine base pairs are sufficient; thus, the snippets can be kept relatively small.

First author of the study in Nucleic Acids Research is Dr. Linda Popella, a research associate at the Department of Molecular Infection Biology I. This is the second time within a year that this young immunologist published a paper in a high-ranking research journal. For Vogel, this proves the outstanding research performed by junior scientists in the HIRI and IMIB laboratories.

Overall, according to the authors of the study, the results show that mRNA-based antibiotics are in principle suitable for combating uropathogenic strains of Escherichia coli. However, several important questions still need to be adressed before using this approach in the clinics. Still, there is an urgent need: “If we don’t want to watch antibiotic-resistant microbes to thwart the successes of modern medicine, we need novel tools that facilitate targeted treatment of pathogens,” says Vogel.