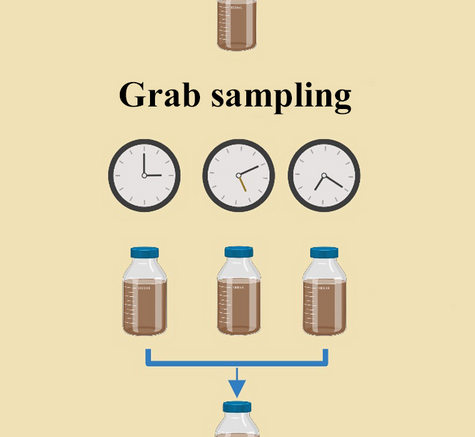 Rice University engineers compared wastewater “grabs” to daylong composite samples and found the grab samples were more likely to result in bias in testing for the presence of antibiotic-resistant genes. Courtesy of Stadler Research Group/Rice University

Testing the contents of a simple sample of wastewater can reveal a lot about what it carries, but fails to tell the whole story, according to Rice University engineers.

Their new study shows that composite samples taken over 24 hours at an urban wastewater plant give a much more accurate representation of the level of antibiotic-resistant genes (ARGs) in the water. According to the Centers for Disease Control and Prevention (CDC), antibiotic resistance is a global health threat responsible for millions of deaths worldwide.

In the process, the researchers discovered that while secondary wastewater treatment significantly reduces the amount of target ARG, chlorine disinfectants often used in later stages of treatment can, in some situations, have a negative impact on water released back into the environment.

The lab of Lauren Stadler at Rice’s George R. Brown School of Engineering reported seeing levels of antibiotic-resistant RNA concentrations 10 times higher in composite samples than what they see in “grabs,” snapshots collected when flow through a wastewater plant is at a minimum.

The results could lead to better protocols for treating wastewater to lower the prevalence of antibiotic-resistant genes in bacteria that propagate at plants and can transfer those genes to other organisms in the environment.

The issue is critical because antibiotic resistance is a killer, causing an estimated 2.8 million infections in the U.S. every year, leading to more than 35,000 deaths, said Stadler, an assistant professor of civil and environmental engineering and a pioneer in the ongoing analysis of wastewater for signs of the SARS-CoV-2 virus responsible for COVID-19.

Those statistics have made it a long-standing focus of efforts at Rice that led to the foundation of a new center, Houston Wastewater Epidemiology, a partnership with the Houston Health Department and Houston Public Works. The center is one of two designated by the CDC announced this year to develop tools and train other state and local health departments in the sciences of monitoring wastewater-borne diseases.

The takeaway for testers is that snapshots can lead to unintended biases in their results, Stadler said.

“I think it’s intuitive that grabbing a single sample of wastewater is not representative of what flows across the entire day,” said Stadler, who is also a faculty member of the Rice-based, National Science Foundation-supported Nanotechnology Enabled Water Treatment (NEWT) Center. “Wastewater flows and loads vary across the day, due to patterns of water use. While we know this to be true, no one had shown the degree to which antibiotic-resistant genes vary throughout the day.”

For the study, the Rice team took both grab and composite samples in two 24-hour campaigns, one during the summer and another during winter, at a Houston-area plant that routinely disinfects wastewater.

They took samples every two hours from various stages of the wastewater treatment process and ran PCR tests in the lab to quantify several clinically relevant genes that confer resistance to fluoroquinolone, carbapenem, ESBL and colistin, as well as a class 1 integron-integrase gene known as a mobile genetic element (MGE) for its ability to move within a genome or transfer from one species to another.

The samples they collected allowed them to determine the concentration of ARGs and loads across a typical weekday, the variability in removal rates at plants based on the grab samples and the impact of secondary treatment and chlorine disinfection on the removal of ARGs, as well as the ability to compare grabs and composites.

The team found that the vast majority of ARG removal occurred due to biological processes as opposed to chemical disinfection. In fact, they observed that chlorination, used as the final disinfectant before the treated wastewater is discharged into the environment, may have selected for antibiotic-resistant organisms.

Because the results from snapshots can vary significantly during any given day, they had to be collected at a steady pace over 24 hours. That required Lou and Ali to spend several long shifts at the City of West University Place wastewater treatment plant. “They camped out,” Stadler said. “They set up their cots and ordered takeout.”

Such commitment will not be necessary if real-time wastewater monitoring becomes a reality. Stadler is part of a Rice collaboration developing living bacterial sensors that would detect the presence of ARGs and pathogens, including SARS-CoV-2, without pause at different locations within a wastewater system. The project underway at Rice to build bacterial sensors that emit an immediate electrical signal upon sensing a target was the subject of a study in Nature in November.

“Living sensors can enable continuous monitoring as opposed to relying on expensive equipment to collect composite samples that need to be brought back to the lab to analyze,” she said. “I think the future is these living sensors that can be placed anywhere in the wastewater system and report on what they see in real time. We’re working towards that.”

Rice undergraduate Karen Lu and Prashant Kalvapalle, a graduate student in the Systems, Synthetic and Physical Biology PhD program, are co-authors of the study.