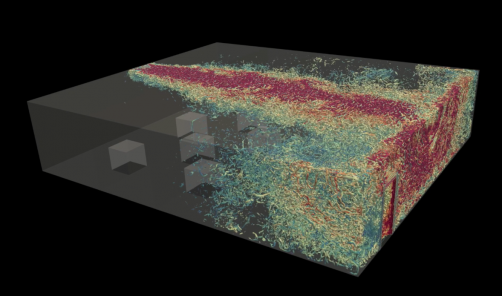 When the ventilation jet and exit door are on opposite sides of the room, a dead zone is formed in which aerosol particles can linger. Courtesy of Ramesh Balakrishnan, Argonne National Laboratory

A team led by Rao Kotamarthi at the US Department of Energy (DOE)'s Argonne National Laboratory (Argonne) is using supercomputers at DOE’s Oak Ridge National Laboratory (ORNL) to study how aerosol viral particles are distributed in a ventilated classroom. Using ORNL’s Summit, the nation’s fastest supercomputer, the team simulated the spread of aerosols through a model elementary school classroom layout to determine the best types of ventilation for such spaces and understand how social distancing requirements affect disease transmission indoors.

The researchers found that the traditional arrangement of the ventilation pathway in a classroom—with the HVAC outlet and the classroom door on opposite walls—creates dead zones. In these dead zones, the air velocities are so low that aerosol particles that are released during normal breathing and speaking tend to linger in these regions and are not expelled via ventilation. However, placing the HVAC inlet and the classroom (exit) door on the same wall reduces the extent of these dead zones considerably.

“Through these simulations, we found that if we use the same air conditioning with the same blowing rate, the same velocity, and the same temperature gradient, but we put the door and HVAC inlet on the same wall, it reduces the formation of the dead zone significantly,” said Ramesh Balakrishnan, a computational scientist at Argonne who performed the simulations on Summit.

The results are providing engineers with information about the ideal design and placement of HVAC systems in classrooms, which could help mitigate the spread of COVID-19 and other viruses in enclosed spaces. They could also help scientists understand the effects of social distancing on the transmission and distribution of aerosols in indoor environments. The team is also currently studying the spread of aerosols in buses for the US Department of Homeland Security (DHS).

When scientists first began tackling COVID-19, understanding how SARS-CoV-2 spreads during simple events such as breathing and talking took a backseat to more extreme events like coughing and sneezing. Little did researchers know what happens when children in an elementary school classroom are speaking, shouting, or singing.

Early in the pandemic, a study in China revealed that the environment in a restaurant could become infected with the COVID-19 virus via aerosol particles, regardless of social distancing. Researchers around the world wanted to know why people who had eaten at a table with an infected person were able to escape the virus but those at neighboring tables were susceptible to the pathogen.

Researchers came up with a theory: it must be the ventilation.

With the aim of understanding the physics of flow-aerosol interactions, the Argonne team ran large eddy simulations (LES) on the Oak Ridge Leadership Computing Facility’s (OLCF’s) Summit supercomputer. The team simulated turbulent flows—the unsteady movement of gases and fluids—with a distribution of aerosol particles ranging in size from 0.1 to 5 microns, or about the size of a human red blood cell. They simulated these flows in a classroom a size of 14 × 12 × 3 meters. The computational time was awarded through a Director’s Discretionary allocation at the OLCF.

“Unlike droplets, which can be 10 to 100 microns in size and do not travel long distances, aerosol particles can be carried more easily by the air, tend to stay in the room for a longer time, and have the potential to infect people if they carry a significant viral load,” Balakrishnan said.

The team modeled a type of ventilation called canister ventilation, in which an HVAC vent is mounted high up on the wall and blowing air horizontally into a room. The researchers wanted to understand the best possible way to mount the HVAC units and the air temperature needed to keep people in the room comfortable and safe.

“There have been numerous experiments and computational studies done on canister ventilation units, so this gave us data we could build on for this study,” Balakrishnan said.

The team modeled 25 student units consisting of a desk, a chair, and a student each. The student units represented obstacles around which air could flow. The team then introduced air coming in from the HVAC vent at the ambient temperature, also known as isothermal flow. They found that with canister ventilation, the dead zone exists at the region immediately in front of the HVAC inlet into the room for isothermal flows.

The team decided to then model four more scenarios. In the first two simulations, they modeled air coming into the room that was 5 and 20 degrees colder than the air in the room.

“When cold air comes into the room, it sinks down because it’s heavier, and it creates a certain convective pattern,” Balakrishnan said. “So, the dead zone that existed in the previous study started disappearing with the lowering of the temperature. By the time we reached 20 degrees lower, the dead zone had completely disappeared.”

In the second two simulations, the team modeled air coming into the room that was 5 and 20 degrees warmer than the air in the room. The team found that hot air generated a bigger dead zone due to the formation of a thermal stratification layer that suppresses turbulence, thereby increasing the extent of the dead zone.

“Imagine a scenario with a teacher facing the class with his back to the wall on which the HVAC duct is located. When the teacher starts speaking, the aerosol particles that are expelled tend to stay in the dead zone in which he is standing,” Balakrishnan said. “If the teacher was infected, the aerosol particles that carry the SARS-CoV-2 pathogen are going to be in circulation in the room for a very long period of time, and the chance someone is going to be infected increases.” Likewise, if there are a group of students whose desks are in a dead zone and one of them is carrying the pathogen, the cloud of aerosol particles that is released by the infected student and the other students in the vicinity could potentially infect many others, including the teacher.

The team modeled various ventilation scenarios in the model classroom and found that when the exit door and the HVAC inlet are on the same wall, it reduced the extent of the dead zone for the isothermal flows as well as for flows with a temperature gradient.

The team’s simulations required a machine such as Summit for two reasons. First, many grid points were required to resolve the length scales of fluid motion. Second, the team needed a large chunk of time to average the velocity, pressure, and temperature of the flow. The simulations were run with a highly scalable spectral element code, nekRS, that was developed by Paul Fischer and his team at the University of Illinois at Urbana-Champaign and Argonne. NekRS was further developed with funding from DOE’s Exascale Computing Project and can run flow simulations on the entire Summit platform.

The team’s flow-aerosol simulations were run as an ensemble, meaning the team could run approximately 30 simulations at the same time. Each simulation had slightly different parameters for temperature, exit door orientation, and HVAC unit orientation.

“With Summit, we were actually able to take LES from an analysis tool to a design tool,” Balakrishnan said. “This study truly couldn’t have happened without Summit. With this system, we discovered we could do something with LES that wouldn’t have been possible on any other platform.”

The study was supported by DOE’s Office of Science through its Biological and Environmental Research program and the National Virtual Biotechnology Laboratory, a consortium of DOE national laboratories focused on response to COVID-19, with funding provided by the Coronavirus CARES Act. DHS is now supporting the team for flow simulations of aerosols in moving buses, trains, and other vehicles. The team expects to have results from the bus studies in 2022.