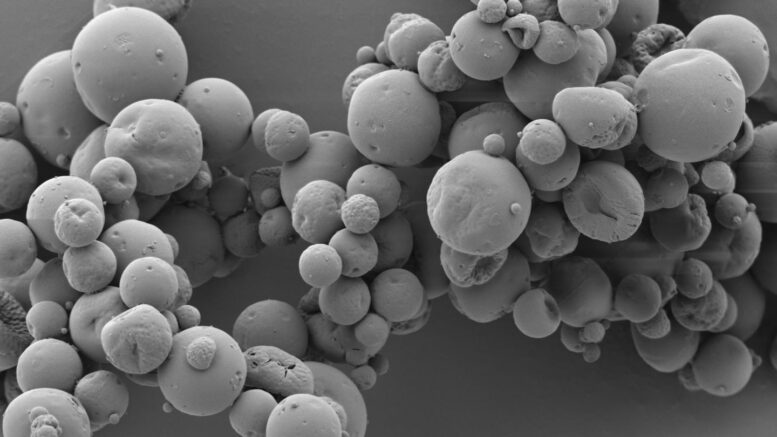 Biodegradable microspheres that are produced via spray drying. They contain an influenza virus antigen and an immunostimulating substance. The image was obtained by electron microscopy, enlarged 3,000 times. Courtesy of Dennis Horvath, University of Konstanz

One shot, protected forever -- this would be a dream come true regarding influenza vaccinations. So far, vaccination against influenza did not provide a lasting protection. The reason: Influenza viruses mutate very fast. Every year, new virus strains emerge against which previous vaccinations provide no or only limited protection. To avoid having to vaccinate against the flu every year, a research network consisting of the University of Konstanz, the University of Tübingen and Technische Universität Dresden is testing an alternative vaccination method.

This new method aims at comprehensive protection against all known influenza mutations and thus is a promising candidate for reaching lasting immunity. In contrast to existing influenza vaccinations, the new method does not trigger the production of antibodies against specific influenza strains, but stimulates the T-lymphocytes (white blood cells) to set off a general immune response against influenza viruses. The Konstanz research team, led by immunologist Marcus Groettrup, is testing the new influenza vaccination method in a pre-clinical trial to verify and deepen the results of a previous pilot study, which proved that the procedure is effective in principle. The pre-clinical trial is funded by the Federal Ministry of Education and Research (BMBF) with around 1.18 million euros.

"We have very promising indications that the same vaccination method can be applied to the coronavirus and other classes of viruses. This method could be an approach to generate general immunity against viral strains -- including all their mutations. In our research on extending the vaccination to SARS-CoV-2, we have already achieved the first successes in collaboration with the companies Trenzyme in Konstanz and Riboxx in Dresden," says Marcus Groettrup. "Every year, influenza viruses cause around three to five million cases of severe influenza worldwide, resulting in a quarter to half a million deaths, particularly among small children and the elderly. In Germany, influenza shots are administered annually. As influenza viruses mutate, the vaccine needs to be newly composed each autumn - targeting the viral strains that are predicted to spread among the population in the winter. "That is very time-consuming and expensive. Moreover, it is quite hard to motivate a large proportion of the population to get a flu shot every year.Current influenza vaccines mainly trigger the production of antibodies against influenza viruses. These antibodies are tailor-made for specific influenza strains, like a key for a lock. If, however, new mutations emerge, the key might no longer fit and the antibodies are no longer effective. "This means that if unpredicted virus strains come up, the seasonal influenza vaccine might not be able to protect against the viruses that actually circulate," Groettrup explains.

To solve this problem, a new vaccination method is required which not only protects against specific influenza viral strains, but against the influenza virus in general. A promising new vaccination method to reach general influenza protection is currently being tested in a pre-clinical mice trial by the research teams around Professor Marcus Groettrup (University of Konstanz), Professor Oliver Planz (University of Tübingen), professor Peter Martus (University Hospital of Tübingen) as well as professor Jacques Rohayem (Technische Universität Dresden and managing director of Riboxx company). By stimulating T-lymphocytes, they intend to set off an immune response at cell level.

T-lymphocytes, and especially one of their subforms, the only recently discovered resident memory T-cells, are the "immune memory of the body" along with antibodies: They recognize the virus and trigger an immune response. Groettrup describes the approach: "We train these memory T-cells for an antigen from the inner virus particle which does not change in all known virus strains." Consequently, the T-lymphocytes recognize the influenza virus in general and can thus combat all known strains. Using the lock and key principle for immune response, Groettrup and his team hope to create a "master key" against influenza viruses.

With the new method, the vaccines are introduced into the body via microspheres. These are completely biodegradable, globular particles the size of a small cell, that can be used as a 'transport container' for the virus antigen and immunostimulating substances. They are produced by spray drying and, in the future, it might be possible to administer them via nasal sprays instead of injections for immunization.