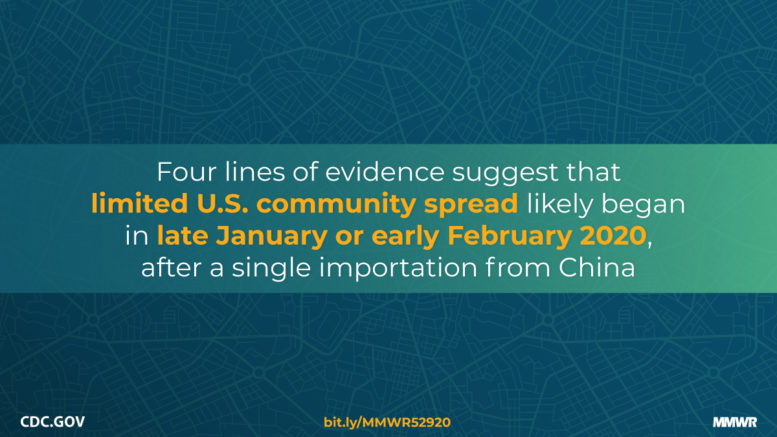 The researchers note, "Examination of four lines of evidence provides insight into the timing of introduction and early transmission of SARS-CoV-2, the virus that causes COVID-19, into the United States before the detection of these two cases. First, syndromic surveillance based on emergency department records from counties affected early by the pandemic did not show an increase in visits for COVID-19–like illness before February 28. Second, retrospective SARS-CoV-2 testing of approximately 11,000 respiratory specimens from several U.S. locations beginning January 1 identified no positive results before February 20. Third, analysis of viral RNA sequences from early cases suggested that a single lineage of virus imported directly or indirectly from China began circulating in the United States between January 18 and February 9, followed by several SARS-CoV-2 importations from Europe. Finally, the occurrence of three cases, one in a California resident who died on February 6, a second in another resident of the same county who died February 17, and a third in an unidentified passenger or crew member aboard a Pacific cruise ship that left San Francisco on February 11, confirms cryptic circulation of the virus by early February. These data indicate that sustained, community transmission had begun before detection of the first two nontravel–related U.S. cases, likely resulting from the importation of a single lineage of virus from China in late January or early February, followed by several importations from Europe. The widespread emergence of COVID-19 throughout the United States after February highlights the importance of robust public health systems to respond rapidly to emerging infectious threats."

4 Comments on "Researchers Report on Evidence for Limited Early Spread of COVID-19 Within the U.S. in January and February 2020"