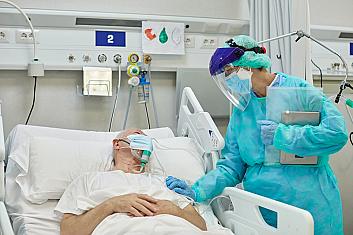 The patient tested positive for COVID-19 for 505 days before their death. The previous longest known PCR confirmed case is thought to be 335 days.

The researchers, who studied the virus from nine Covid patients in London, also provide evidence that new Covid variants may arise in immunocompromised individuals and present details of one of the first occult Covid infections (cases where the patient was thought to have cleared the virus, with negative testing to show that, but is subsequently found to have had an ongoing infection).

The team, from King’s College London and Guy’s and St Thomas’ NHS Foundation Trust, were interested in how SARS-CoV-2 changes over time in immunocompromised individuals.

First author Dr. Luke Blagdon Snell, of Guy’s and St Thomas’ NHS Foundation Trust, says, “New variants of SARS-CoV-2, the virus that causes COVID-19, have emerged throughout the pandemic. Some of these variants transmit more easily between people, cause more severe disease, or make the vaccines less effective. One theory is that these viral variants evolve in individuals whose immune systems are weakened from illness or medical treatments like chemotherapy, who can have persistent infection with SARS-CoV-2. We wanted to investigate which mutations arise, and if variants evolve, in these people with persistent infection.”

The study involved nine immunocompromised patients who tested positive for the virus for at least eight weeks. Infections persisted for 73 days, on average, but two patients had persistent infections for more than a year.

The patients, who were studied between March 2020 and December 2021, had weakened immune systems due to organ transplantation, HIV, cancer, or medical therapies for other illnesses.

Dr. Gaia Nebbia, co-author, says, “Immunocompromised patients with persistent infection have poor outcomes, and new treatment strategies are urgently needed to clear their infection. This may also prevent the emergence of variants.”

The researchers also report one of the first cases of an occult COVID-19 infection.

They say, “Occult infection describes someone who is thought to have cleared the virus, for instance with negative tests, but is later found to have an ongoing infection. This has been described with other viruses such as those that cause Ebola or hepatitis B and is different to long Covid where the virus is generally thought to be cleared from the body but symptoms persist. The patient was symptomatic and tested positive for Covid before recovering. They then tested negative several times before developing Covid symptoms again several months later. A PCR test was positive and genome sequencing of the virus at this point showed the infection was caused by the Alpha variant, which had by then been eliminated from the UK, suggesting the virus had been present in the body ever since the initial infection but remained undetected.”