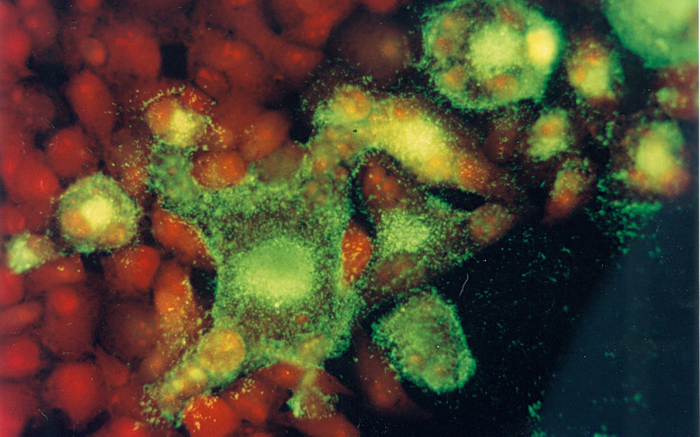 An immunofluorescence micrograph of cells infected by RSV (RSV is green, cells are red). Courtesy of UT Southwestern Medical Center

A new approach that targets the cellular machinery that viruses need to reproduce – rather than the virus itself – appears to stem replication of a common childhood pathogen known as respiratory syncytial virus (RSV), UT Southwestern researchers report in a new study. The findings, published in Scientific Reports, could offer a novel strategy to fight this virus and others, including SARS-CoV-2, the virus responsible for the ongoing COVID-19 pandemic.

“RSV is far and away the major respiratory pathogen in infants and children,” said study leader Jeffrey Kahn, MD, PhD, professor of pediatrics and microbiology, chief of the Division of Pediatric Infectious Disease at UT Southwestern, and director of infectious diseases and medical director of research at Children’s Medical Center Dallas. “The approach we’ve discovered turns the tables on this virus and potentially others in a whole new way.”

RSV is a leading cause of pediatric deaths worldwide, killing an estimated 160,000 children each year, according to the National Institute of Allergy and Infectious Diseases. But although 65 years have passed since its discovery, there are still no effective treatments or a vaccine. Although some promising antiviral drugs have been explored that target components of this and other viruses, explained Kahn, viruses inevitably evolve to develop resistance against these compounds.

Taking a completely new approach, Kahn and his colleagues used genetic and pharmacological inhibition to search for vulnerable cellular pathways that RSV hijacks to replicate itself. Their experiments showed that inhibiting various components of a protein network known as the mechanistic target of rapamycin (mTOR) pathway prevented RSV from replicating in human cells. They also showed that this same strategy inhibited OC43, a human coronavirus in the same viral subfamily as SARS-CoV-2.

Because some of the drugs shown to inhibit mTOR components and block viral replication in this study are already approved by the Food and Drug Administration, they could offer hope for quick approval as antivirals against RSV, SARS-CoV-2, and other viral infections if further research confirms their utility, Kahn said.

Other scientists who contributed to this study include HoangDinh Huynh and Ruth Levitz of UTSW, and Rong Huang of Children’s Medical Center.