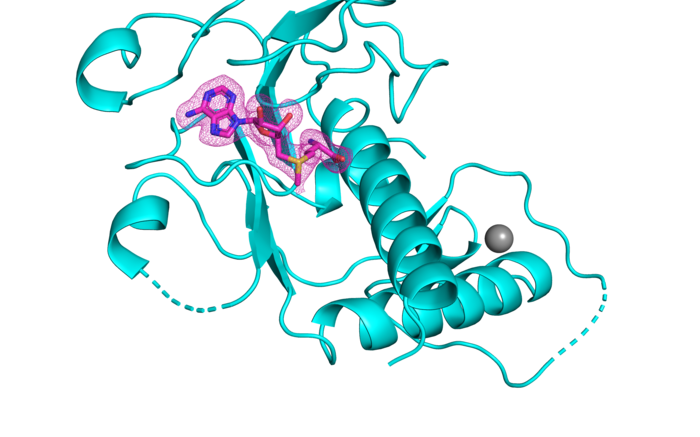 A team of Mount Sinai researchers has produced a high-resolution crystal structure of an enzyme essential to the survival of SARS-CoV-2, the virus that causes COVID-19. The discovery could lead to the design of critically needed new antivirals to combat current and future coronaviruses.

The enzyme, known as nsp14, has a crucially important region known as the RNA methyltransferase domain, which has eluded previous attempts by the scientific community to characterize its three-dimensional crystal structure. A paper describing the innovative process was published in the September 8 online edition of Nature Structural & Molecular Biology [DOI: 10.1038/s41594-022-00828-1].

“Being able to visualize the shape of the methyltransferase domain of nsp14 at high resolution gives us insights into how to design small molecules that fit into its active site, and thus inhibit its essential chemistry,” says senior author Aneel Aggarwal, PhD, professor of pharmacological sciences at the Icahn School of Medicine at Mount Sinai. “With this structural information, and in collaboration with medicinal chemists and virologists, we can now design small molecule inhibitors to add to the family of antivirals that go hand-in-hand with vaccines to combat SARS-CoV-2.”

Prescription antivirals that target key enzymes of SARS-CoV-2 include nirmatrelvir for the main protease (MPro) enzyme, and molnupiravir and remdesivir for the RNA polymerase (nsp12) enzyme. Research to develop new antivirals targeting different enzymatic activities has been accelerating in laboratories around the world, and Mount Sinai’s discovery has added significantly to that effort.

“Part of what drives our work,” says Aggarwal, “is the knowledge gained from treating HIV—that you typically need a cocktail of inhibitors for maximum impact against the virus.”

The Mount Sinai team actually developed three crystal structures of nsp14, each with different cofactors, from which they identified the best scaffold for the design of antivirals for inhibiting the RNA methyltransferase activity that the enzyme enables and the virus needs to survive. According to their scheme, the antiviral would take the place of the natural cofactor S-adenosylmethionine, thus preventing the methyltransferase chemistry from occurring. The crystal structures that the team has elucidated have been made available to the public and will now serve as guides for biochemists and virologists globally to engineer these compounds.

Making the discovery possible was the ability of researchers to clear a hurdle that had prevented others in the past from creating three-dimensional crystals of the nsp14 methytransferase domain. “We employed an approach known as fusion-assisted crystallization,” explains lead author Jithesh Kottur, PhD, a postdoctoral fellow at Icahn Mount Sinai, and a crystallographer and biochemist. “It involves fusing the enzyme with another small protein that helps it to crystalize.”

Aggarwal, an internationally recognized structural biologist, underscores the importance of ongoing investigative work by researchers in his field against a virus that has led to millions of deaths globally. “The virus evolves so quickly that it can develop resistance to the antivirals now available, which is why we need to continue developing new ones,” he observes. “Because of the high sequence conservation of nsp14 across coronaviruses and their variants (meaning it does not mutate much), our study will aid in the design of broad-spectrum antivirals for both present and future coronavirus outbreaks.”