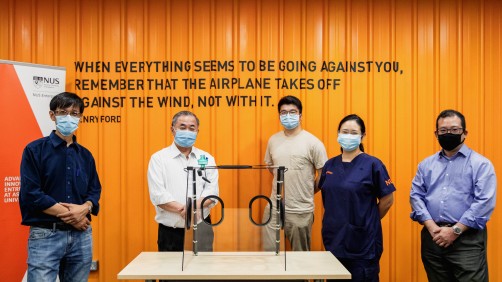 The multi-disciplinary team led by Associate Professor Yen Ching-Chiuan (first from left) and professor Freddy Boey (second from left) took less than two months to develop the Droplet and Aerosol Reducing Tent (DART). With them are members of the research team: Raymond Hon (center), Dr. Deborah Khoo (second from right), and Dr. Alfred Chia (first from right). Courtesy of National University of Singapore

A team of researchers from the National University of Singapore (NUS) has invented a foldable tent-like device that serves as a physical shield to reduce the risk of exposure to pathogens for healthcare workers performing droplet and aerosol generating procedures on COVID-19 patients. Known as the Droplet and Aerosol Reducing Tent (DART), the device was designed in collaboration with doctors from the National University Hospital (NUH).

The DART can lessen the risks of infection associated with procedures such as suctioning, intubation and extubation by providing an extra layer of protection between the healthcare workers and the patient. It also helps to limit environmental contamination, which can be a source of transmission.

“The quick invention and deployment of DART was made possible through a close collaboration between the NUS and NUH teams, which allowed multiple refinements to be made to the prototypes within a very short time. The NUS team was able to come up with the various designs while adhering to the restrictions of the circuit breaker period, and found different ways to address design and performance related challenges when many resources were not available. The NUH team was instrumental in testing our prototypes in a clinical setting, allowing us to interactively and rapidly refine the performance of the device,” said Boey.

The COVID-19 pandemic dramatically increased the need for infection control when intubating patients. Intubation is the placement of a flexible plastic tube into the windpipe to maintain an open airway or to serve as a conduit through which to administer certain drugs. The removal of this plastic tube is known as extubation. These are risky procedures that may put healthcare workers in danger of becoming infected.

Evidence from the Severe Acute Respiratory Syndrome (SARS) outbreak in 2003 showed that healthcare workers involved in intubation were more likely to contract the disease compared with those who did not. This risk has similar implications for the current coronavirus outbreak, affecting anaesthesiologists, operating theater staff, intensive care unit staff, and even first responders who are required to intubate collapsed patients in the COVID-19 general ward.

Khoo, a consultant at the NUH Department of Anesthesia, said, “Healthcare workers caring for patients run the risk of being exposed to known, suspected, or even asymptomatic COVID-19 patients. The DART serves as an additional physical barrier to infection and provides enhanced protection for healthcare staff at a time when they need it the most, giving us greater peace of mind and enabling care to continue safely for both patients and healthcare workers in the hospitals.”

The DART is a portable, tent-like structure that that can be placed around the patient’s head when intubating or extubating. It weighs three kilograms, and can be folded into a flat structure measuring around 51 centimetres by 55 centimetres, with a thickness of three centimetres, making it easy to transport, store and sterilize. It is also simple and fast to set up.

The device features transparent polycarbonate panels, 3D printed nylon joints and Delrin inserts. These durable materials were chosen by the NUS team to enable the device to be sterilized by all standard forms of decontamination used in hospitals, such as elevated temperature autoclaving, and using alcohol of 70 per cent concentration. This facilitates the reusability of the device, and eliminates the risk of cross-contamination.

Arm access ports are situated on the back and side panels of the device. The snap-on flanges allow the attachment of disposable sleeves or diaphragms. This addresses the concern of the arm ports being high risk areas of contamination, and gives the healthcare workers the option to use either sleeved or diaphragm seals – materials easily available in hospitals – according to their preference. The elliptical shape of the access ports gives the user more leeway for arm movements and to maneuvre, which are important in handling the patient.

A key feature of the DART is its ability to direct air within itself through a High Efficiency Particulate Air (HEPA) filter. It has a set of connectors that enables suction from a central vacuum system, or by a battery-operated fan attached to a HEPA filter. The negative pressure generated reduces leakage of exhaled aerosols or droplets from the patient out of the confines of the DART.

Preliminary findings by the research team showed that the DART performs its barrier function as designed, and the exhaust function via the HEPA filter gives additional assurance to the user.

The team is looking to swiftly refine the DART based on the feedback provided by different medical departments, and hopes to provide the device as a form of medical aid to Singapore hospitals as well as hospitals in the region. The team will be partnering Temasek Foundation to distribute the DART, complementing its donation of ventilators to the region.

The DART is one of the innovations developed by NUS and NUH to tackle pressing issues that healthcare workers face in the current global pandemic.