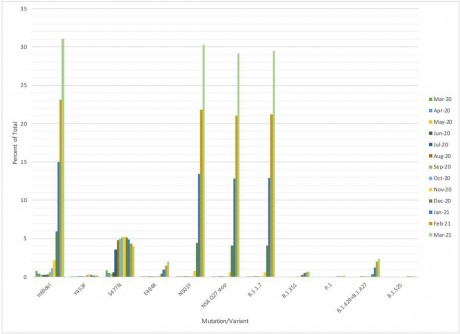 The number of COVID-19 variants is growing rapidly, so much that the scale and scope of mutation may pose a threat to the continuing successful use of the current vaccines and therapies.

The findings, by an international team that includes University of California researchers, are being published in the June edition of the journal EMBO Molecular Medicine. The pace of variation of the SARS-CoV-2 virus strains makes plain the threat that rapidly evolving new strains might give rise to escape variants, capable of limiting the efficacy of vaccines, therapies, and diagnostic tests.

“While there were only about 10 dominant mutations of the virus worldwide in April, 2020, their number had risen to roughly 100 mutations by spring, 2021,” said Dr. Christina Ramirez, a UCLA Fielding School of Public Health professor of biostatistics and a co-lead author of the study, which examined mutations in SARS-CoV-2 RNA sequences isolated between January, 2020, and March, 2021.

“Throughout 2020 and into the first quarter of 2021, more mutations in combination were found and propagated rapidly, despite lockdowns and other efforts to contain the spread,” Ramirez said. “The speed by which the virus travelled, even during lockdowns, emphasizes the difficulty in suppressing transmission of highly contagious respiratory viruses.”

The research team, made up of scientists from UCLA; the University of California, Davis; and Friedrich-Alexander University (FAU) and the University of Cologne in Germany, studied mutations and variants isolated in the United States, India, Brazil, Russia, the United Kingdom, France, Spain, Germany, South Africa, and China. The team defines variants as viruses with a specific set of mutations, and by that measure, while up to April, 2020, only about 10 mutations were prevalent, at least 77 – and possibly as many as 100 new mutations - were found up to January, 2021.

“At the end of April of this year, we followed the SARS-CoV-2 infection explosion in India with more than 353,000 cases and 2,812 deaths per day - the highest number of cases ever recorded worldwide,” said co-author Dr. Stefanie Weber, with FAU. “The virus variants known to date could be more contagious and potentially more disease-causing than the original virus from Wuhan.”

As just one example cited in the analysis (published as “SARS-Cov-2 Worldwide Replication Drives Rapid Rise and Selection of Mutations across the Viral Genome: A Time-Course Study – Potential Challenge for Vaccines and Therapies”), the so-called UK variant, also known as B.1.1.7 or alternatively VOC202012/01 now known as Alpha, was first identified in England in September 2020. In December, it was reported as a rapidly spreading variant of concern that had 14 mutations in total. This variant has been associated with higher transmissibility and at least one confirmed case of reinfection. On December 23, 2020, the time of the lockdown, the variant was found in three countries. As of April 5, it was found in 108.

“This process continues and, despite the vaccine campaign, could develop further if it is not possible to stem the spread quickly enough,” said Dr. Walter Doerfler, with the Institute for Virology, Friedrich-Alexander University Erlangen-Nürnberg and Institute of Genetics, University of Cologne. “However, it is still unknown whether the infection with certain coronavirus mutants are specifically related to the type and severity of COVID-19 disease. Another aspect of interest we have pursued was the finding that between 40 and 70% of the new SARS-CoV-2 mutations occurring in the 10 countries investigated were cytidine (C) to uridine (U) transitions. Apparently, this loss of C residues in the viral genome seemed to be counteracted by about 20% of guanosine (G) or C mutations to adenosine (A) or U residues. We are still puzzled by the intricate interactions of mutagenesis and selection of SARS-CoV-2 mutants.”

Given how much remains unknown about COVID-19, and the risks of further mutations and variants, the authors said public health agencies must commit resources for in-depth and on-going research; especially important is tracking the potential for mutations across the entirety of the SARS-CoV-2 viral genome, including replication functions, all the virus’s various proteins, and the viral genome.

“Our work documents the speed and power of SARS-CoV-2 mutant selection, which in turn may reduce the efficacy of COVID therapies and vaccines,” said co-author Dr. Barbara Weiser, an infectious disease specialist at UC Davis. “Molecular sequencing of Covid-19 to detect new mutants and variants must continue in order to optimize treatment and prevention of SARS-CoV-2.”

Dr. Harold Burger, also a co-author and infectious disease physician from UC Davis, added that, “ideally, the molecular sequencing should include viruses from asymptomatic and mildly ill people with a spectrum of ages in addition to specimens obtained from sicker patients. Asymptomatic individuals can and do transmit the virus to others. The degree of illness is a consequence of the condition of the patient, not only a function of the virus. This approach will provide valuable information on the evolution and spread of the epidemic.”