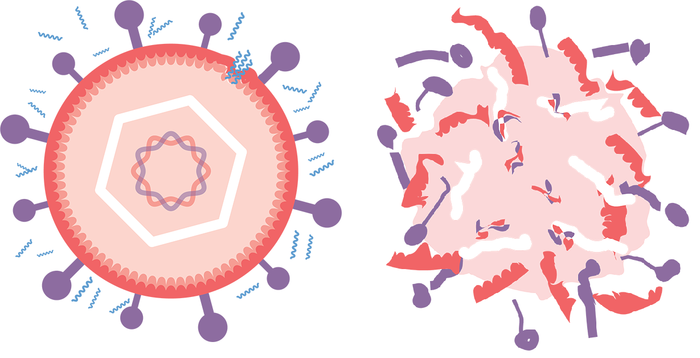 Peptoids (blue, left) pierce the protective coat of a virus, causing its disintegration and inactivation (right). Courtesy of Maxwell Biosciences

In addition to antibodies and white blood cells, the immune system deploys peptides to fight viruses and other pathogens. Synthetic peptides could reinforce this defense but don’t last long in the body, so researchers are developing stable peptide mimics. Today, scientists report success in using mimics known as peptoids to treat animals with herpes virus infections. These small synthetic molecules could one day cure or prevent many kinds of infections, including COVID-19.

The researchers will present their results at the fall meeting of the American Chemical Society (ACS). ACS Fall 2021 is a hybrid meeting being held virtually and in-person Aug. 22-26, and on-demand content will be available Aug. 30-Sept. 30. The meeting features more than 7,000 presentations on a wide range of science topics.

“In the body, antimicrobial peptides such as LL-37 help keep viruses, bacteria, fungi, cancer cells and even parasites under control,” says Annelise Barron, PhD, one of the project’s principal investigators. But peptides are quickly cleared by enzymes, so they’re not ideal drug candidates. Instead, she and her colleagues emulated the key biophysical attributes of LL-37 in smaller, more stable molecules called peptoids. “Peptoids are easy to make,” says Barron, who is at Stanford University. “And unlike peptides, they’re not rapidly degraded by enzymes, so they could be used at a much lower dose.”

Peptides consist of short sequences of amino acids, with side chains bonded to carbon atoms in the molecules’ backbone. This structure is easily broken apart by enzymes. In peptoids, the side chains are instead linked to nitrogens in the molecular backbone, forming a structure that resists enzymes. They were first created in 1992 by Chiron Corp.’s Ronald Zuckermann, PhD, later Barron’s postdoctoral adviser. Unlike other types of peptide mimics that require laborious, multi-step organic chemistry to produce, peptoids are simple and inexpensive to make with an automated synthesizer and readily available chemicals, she says. “You can make them almost as easily as you make bread in a bread machine.”

Barron, Zuckermann, Gill Diamond, PhD, of the University of Louisville and others founded Maxwell Biosciences to develop peptoids as clinical candidates to prevent or treat viral infections. They recently reported results with their newest peptoid sequences, which were designed to be less toxic to people than previous versions. In lab dishes, the compounds inactivated SARS-CoV-2, which causes COVID-19, and herpes simplex virus-1 (HSV-1), which causes oral cold sores, making the viruses incapable of infecting cultured human cells.

Now, the researchers are reporting in vivo results, showing that the peptoids safely prevented herpes infections in mice when dabbed on their lips. Diamond’s team is conducting additional experiments to confirm the mouse findings. In addition, they will investigate the peptoids’ effectiveness against HSV-1 strains that are resistant to acyclovir, the best current U.S. Food and Drug Administration-approved antiviral treatment for this condition, Barron says.

The researchers are also getting ready to test peptoids for activity against SARS-CoV-2 in mice. “COVID-19 infection involves the whole body, once somebody gets really sick with it, so we will do this test intravenously, as well as looking at delivery to the lungs,” Barron says.

But these antimicrobial molecules could have many more applications. Work is ongoing at Stanford to explore their impact on ear and lung infections. And Barron has sent peptoid samples to experts in other labs to test against a range of viruses, with promising results in lab dish studies against influenza, the cold virus, and hepatitis B and C. “In their in vitro studies, a team found that two of the peptoids were the most potent antivirals ever identified against MERS and older SARS coronaviruses,” Barron says. Other labs are testing the peptoids as anti-fungals for airways and the gut and as anti-infective coatings for contact lenses, catheters and implanted hip and knee joints.

Diamond and Barron are studying how these broad-spectrum compounds work. They seem to pierce and break up the viral envelope and also bind to the virus’ RNA or DNA. That multipronged mechanism has the advantage of inactivating the virus, unlike standard antivirals, which slow viral replication but still allow viruses to infect cells, Barron says. It also makes it less likely that pathogens could develop resistance.

Barron expects clinical trials to begin within the year. If successful, she says, peptoids could be given as a preventative — for instance, before air travel to protect a passenger from COVID-19 — or after an infection takes hold, such as when a person feels the telltale tingle of an oncoming cold sore.