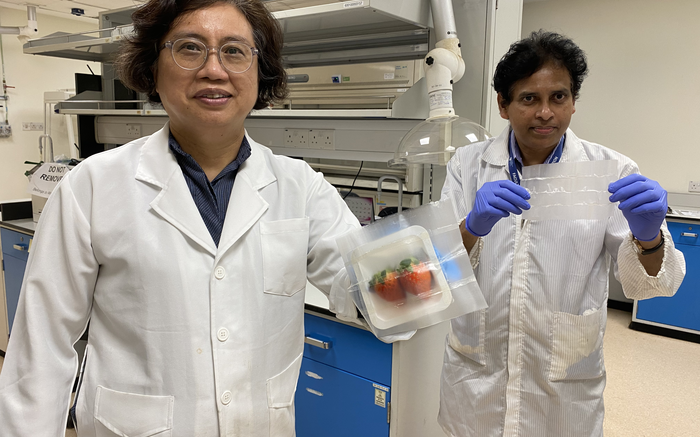 A team of scientists from Nanyang Technological University, Singapore (NTU Singapore) and Harvard T.H. Chan School of Public Health, has developed a ‘smart’ food packaging material that is biodegradable, sustainable and kills microbes that are harmful to humans. It could also extend the shelf-life of fresh fruit by two to three days.

The water-proof food packaging is made from a type of corn protein called zein, starch and other naturally derived biopolymers, infused with a cocktail of natural antimicrobial compounds. These include oil from thyme, a common herb used in cooking, and citric acid, which is commonly found in citrus fruits.

In lab experiments, when exposed to an increase in humidity or enzymes from harmful bacteria, the fibers in the packaging have been shown to release the natural antimicrobial compounds, killing common dangerous bacteria that contaminate food, such as E. coli and Listeria, as well as fungi.

The packaging is designed to release the necessary miniscule amounts of antimicrobial compounds only in response to the presence of additional humidity or bacteria. This ensures that the packaging can endure several exposures, and last for months.

As the compounds combat any bacteria that grow on the surface of the packaging as well as on the food product itself, it has the potential to be used for a large variety of products, including ready-to-eat foods, raw meat, fruits, and vegetables.

The invention is the result of the collaboration by scientists from the NTU-Harvard T. H. Chan School of Public Health Initiative for Sustainable Nanotechnology (NTU-Harvard SusNano), which brings together NTU and Harvard Chan School researchers to work on cutting edge applications in agriculture and food, with an emphasis on developing non-toxic and environmentally safe nanomaterials.

The development of this advanced food packaging material is part of the University’s efforts to promote sustainable food tech solutions, that is aligned with the NTU 2025 strategic plan, which aims to develop sustainable solutions to address some of humanity’s pressing grand challenges.

Professor Mary Chan, director of NTU’s Centre of Antimicrobial Bioengineering, who co-led the project, said, “This invention would serve as a better option for packaging in the food industry, as it has demonstrated superior antimicrobial qualities in combatting a myriad of food-related bacteria and fungi that could be harmful to humans. The packaging can be applied to various produces such as fish, meat, vegetables, and fruits. The smart release of antimicrobials only when bacteria or high humidity is present, provides protection only when needed thus minimizing the use of chemicals and preserving the natural composition of foods packaged.”

Professor Philip Demokritou, adjunct professor of environmental health at Harvard Chan School, who is also director of the Nanotechnology and Nanotoxicology Center and co-director of NTU-Harvard Initiative on Sustainable Nanotechnology, who co-led the study, said, “Food safety and waste have become a major societal challenge of our times with immense public health and economic impact which compromises food security. One of the most efficient ways to enhance food safety and reduce spoilage and waste is to develop efficient biodegradable non-toxic food packaging materials. In this study, we used nature-derived compounds including biopolymers, non-toxic solvents, and nature-inspired antimicrobials and develop scalable systems to synthesize smart antimicrobial materials which can be used not only to enhance food safety and quality but also to eliminate the harm to the environment and health and reduce the use of non-biodegradable plastics at global level and promote sustainable agri-food systems.”

The results of the study were published in the peer-reviewed academic journal ACS Applied Materials & Interfaces in October.

The packaging industry is the largest and growing consumer of synthetic plastics derived from fossil fuels, with food packaging plastics accounting for the bulk of plastic waste that are polluting the environment.

In Singapore, packaging is a major source of trash, with data from Singapore’s National Environment Agency showing that out of the 1.76 million tons of waste disposed of by domestic sources in 2018, one third of it was packaging waste, and over half of it (55 percent) was plastic.

The smart food package material, when scaled up, could serve as an alternative to cut down on the amount of plastic waste, as it is biodegradable. Its main ingredient, zein, is also produced from corn gluten meal, which is a waste by-product from using corn starch or oils in order to produce ethanol.

The food packaging material is produced by electrospinning the zein, the antimicrobial compounds with cellulose, a natural polymer starch that makes up plant cell walls, and acetic acid, which is commonly found in vinegar.

Chan added, “The sustainable and biodegradable active food packaging, which has inbuilt technology to keep bacteria and fungus at bay, is of great importance to the food industry. It could serve as an environmentally friendly alternative to petroleum-based polymers used in commercial food packaging, such as plastic, which have a significant negative environmental impact.”

The team of NTU and Harvard Chan School researchers hope to scale up their technology with an industrial partner, with the aim of commercialization within the next few years.

They are also currently working on developing other technologies to develop biopolymer-based smart food package materials to enhance food safety and quality.