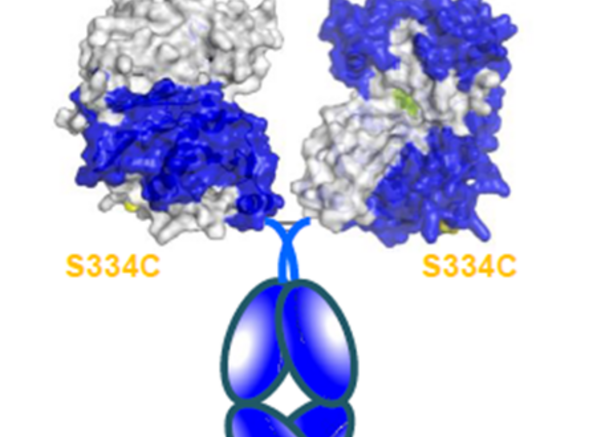 This engineered enzyme with bits of antibody stuck to it can break apart the capsule of B. anthracis bacteria, allowing the immune system to fight back. Adapted from ACS Infectious Diseases, DOI: 10.1021/acsinfecdis.2c00227

In the 2001 “Amerithrax” attacks, anthrax-causing spores were sent through the mail to media outlets and members of Congress, sickening at least 22 people and killing five. Antibiotic-resistant strains of the bacteria are of growing concern, and researchers are preparing to fight back. Now, a team reporting in ACS Infectious Diseases has taken a step toward the development of a therapeutic that can treat the infection in mice without antibiotics.

Bacillus anthracis is a type of bacteria that can lead to anthrax infection through exposure to its spores, either by ingestion, inhalation or a cut in the skin. The infection can lead to difficulty breathing, skin ulcers or even death. Although antibiotics against anthrax infection exist, resistance to these drugs can occur over time.

One type of B. anthracis, called the Ames strain, is particularly virulent because it can wrap itself in a protective capsule of poly-D-glutamic acid that acts like a cloak of invisibility, helping the bacteria evade the human immune system. A B. anthracis enzyme called CapD anchors the capsule material to the bacteria, but previous studies have reported that the enzyme can be engineered to degrade the capsule instead, making the bacteria susceptible to the immune system. Studies have also shown that providing mice with the engineered CapD can help treat an Ames-strain anthrax infection without the use of antibiotics. In addition, Patricia Legler and colleagues have demonstrated that adding polyethylene glycol (PEG) to this version of CapD can help the enzyme stick around longer, increasing mouse survival. In this study, the team wanted to optimize the treatment even further.

To improve the re-engineered enzyme’s lifetime in the body and deliver a bigger punch, the researchers added PEG and fused the CapD protein with part of a mouse antibody. This resulted in two CapD enzymes bound together, which would essentially double its capsule-binding power. The researchers created several versions of the enzyme and subjected them to many rounds of optimization, deleting and inserting different segments until they achieved a sequence that both held its 3D shape and performed as expected in a range of pH values. When tested in a mouse model, this construct lasted longer than the previous version without the fused antibody, though it had reduced activity. The researchers say that more research is needed to produce the ideal construct, but the results are an important step toward a better treatment against antibiotic-resistant B. anthracis strains.