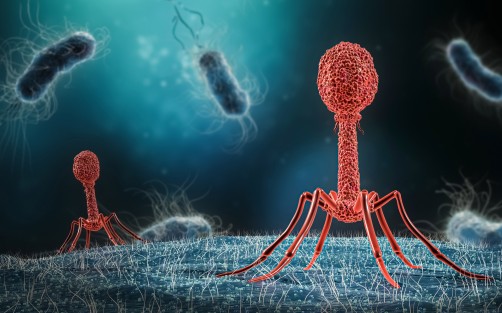 Scientists believe that if the original strain of SARS-CoV-2, the virus that causes COVID-19, had remain unchanged, the pandemic largely would be over by now. Instead, the virus has mutated several times, leading to more contagious strains and continued waves of COVID infections.

Culminating 10 years of research, a study by University of California San Diego scientists has uncovered an intriguing new understanding of how viruses and the hosts they infect evolve new innovations to outcompete each other. Animesh Gupta, formerly in the UC San Diego Department of Physics (now at Generate Biomedicines Inc.), School of Biological Sciences associate professor Justin Meyer and their colleagues developed new technologies and conducted a series of experiments to reveal the changes viruses and hosts undergo in their ongoing survival competition.

The researchers provide new evidence of the role this coevolution plays in driving new adaptations. As described in the journal eLife, the researchers found that coevolution propels changes in the organism’s overall fitness. Bacteria, for example, are well known to evolve resistance to viral infections, which prompts viruses to adapt to work around the resistance, leading to new mutations that create a novel entryway.

“There’s a dance back and forth for adaptation and resistance. First the virus mutates and increases the pressure on the bacteria, then the bacteria responds by evolving resistance, and the virus innovates to overcome the resistance,” said Meyer, a researcher in the Department of Ecology, Behavior and Evolution. “Viruses being able to innovate in an evolutionary genetic sense happens much more repeatedly and quickly than we expected due to this continuous evolutionary arms race.”

Since the days of Darwin, scientists have known that during the struggle for survival species are known to evolve new functions in order to adapt to new ecological challenges and opportunities. But many of these ideas were based on a single, isolated organism’s evolution. Much less has been known about how the evolution of one species influences the evolution of another since all organisms are constantly evolving. Theories had suggested that coevolution between species boosts the prospects of new innovations by changing the organism’s “fitness landscape,” a broad measure of genetic fitness.

When Meyer and his colleagues first explored these concepts 10 years ago, technologies did not exist to adequately measure the details of how such fitness landscapes could change in a Darwinian sense. As technologies developed, Meyer tapped into new high-throughput gene editing-phenotyping technology, which enabled him and his colleagues to meticulously measure the fitness landscapes of hundreds of viruses (bacteriophages) and their coevolution with their hosts (the bacterium Escherichia coli or E. coli).

The resulting new technology allowed the scientists to track back-and-forth interactions mutation-by-mutation. The results offered fresh perspectives on changes to the contours of the bacteriophage virus’ fitness landscape.

“By linking multiple technologies, including genome engineering with next-generation sequencing that allowed us to count mutants, we could measure how they were competing against each other,” said Meyer. “We could see the changes during coevolution and witness what was allowing the new mutations.”

The results revealed that nearly every viral genotype’s fitness depended on which host it infected, making the metaphor of a static “landscape” to describe evolutionary fitness passé. Instead, the researchers began using the term fitness “seascape”—reflecting the constant waves of dynamic changes—as a much more accurate descriptor.

“This study provides direct evidence for the role of coevolution in driving evolutionary novelty and provides a quantitative framework for predicting evolution in coevolving ecological communities,” the authors write in their study. “Our studies show that the fitness of a parasite depends on the complex genetic interactions within its own genome and with the genomes of interacting hosts. These interdependencies result in highly contingent evolution…”

With their new technology and novel insights in hand, Meyer and his colleagues will now focus on different types of fitness seascapes, their structures and the types of evolutionary fitness that unfold.

With viruses such as SARS-CoV-2, the new research avenues are poised to help determine general principles for how such organisms evolve. That information could eventually help scientists make better predictions for the paths of viral evolution.

“We’d like to know more about the mutations in the next round that allow the virus to escape future immunity,” said Meyer. “Can we get a sense of not just one cycle but multiple cycles in the future?”