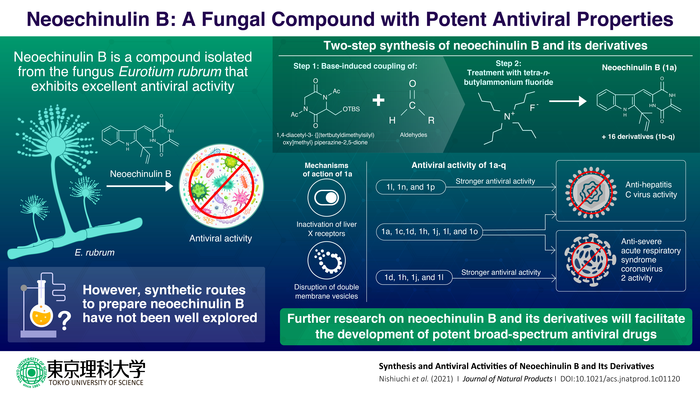 Scientists propose a two-step synthesis process for anti-viral compounds neoechinulin B and its derivatives. Courtesy of Tokyo University of Science

The solutions to many of humanity’s problems can be found within nature. For instance, who could have guessed that an antibiotic as powerful as penicillin would be found in a common mold, or that the drug aspirin would be derived from the bark of the willow tree?

Research into natural products has become a crucial part of drug discovery. Natural products have exhibited promising specificity and efficacy when used against a variety of pathogens, including viruses. For instance, an organic compound called neoechinulin B, isolated from the fungus Eurotium rubrum, has demonstrated antiviral activity against hepatitis C virus (HCV). However, the isolation of such compounds from natural sources can get quite tedious and expensive. Yet, the attempts to synthetically synthesize it seem to be very scarce.

Thus, a group of scientists from across Japan rose to the occasion and embarked on a mission: To discover a simple route for synthesizing neoechinulin B under laboratory conditions. The team included professor Kouji Kuramochi and Dr. Koichi Watashi from Tokyo University of Science, along with Dr. Hirofumi Ohashi, Dr. Shusuke Tomoshige, Dr. Kenji Ohgane, and Dr. Shinji Kamisuki from the National Institute of Infectious Diseases, Tohoku University, Ochanomizu University, and Azabu University, respectively. Their findings were recently published in the Journal of Natural Products.

Commenting on their strategy, Kuramochi, the lead author of the study, says: “We designed a streamlined two-step synthesis strategy to obtain diketopiperazine scaffold of neoechinulin B. The process involved the base-induced coupling of available piperazine-2,5-dione derivative was aldehydes. The coupled products were then treated with a commercial reagent called tetra-n-butylammonium fluoride (TBAF) which gave us neoechinulin B and its 16 other derivatives.”

To ascertain the efficacy of their products, the team tested the antiviral activity of neoechinulin B and its derivatives against different positive-strand RNA viruses, such as HCV and severe acute respiratory syndrome coronavirus 2 (SARS-CoV-2). They found that some derivatives showed anti-HCV activity with minimal cell toxicity, while others showed anti-SARS-CoV-2. Moreover, six derivatives exhibited both strong anti-HCV and SARS-CoV-2.

Further studies by the research team uncovered that neoechinulin B and one derivative can reduced the transcriptional activity of liver X receptors (LXRs). This subsequently disrupts the formation of double-membrane vesicles (DMV), which are the sites where viral RNA replication occur. This process results in reduced viral replication in the infected cells.

Along with the 17 active compounds, the scientists also produced three other compounds which, while structurally related to the others, possessed none of the antiviral properties. Further investigation into their molecular structure revealed that inactive compounds were missing the exomethylene moiety which is the key to the antiviral activities of neoechinulin B and its 16 derivatives against HCV and SARS-CoV-2.

The team believes that the insights from this research could be used as a framework for the development of new broad-spectrum antiviral drugs. The study also solidifies the fact that natural products can act as promising lead compounds for the development of antiviral drugs. “The skeleton of neoechinulin B is simple, but only one chemical synthesis method has been reported in the past. Our research presented a simple and viable method for obtaining promising antiviral compounds bringing us one step closer to its practical application,” Kuramochi says.