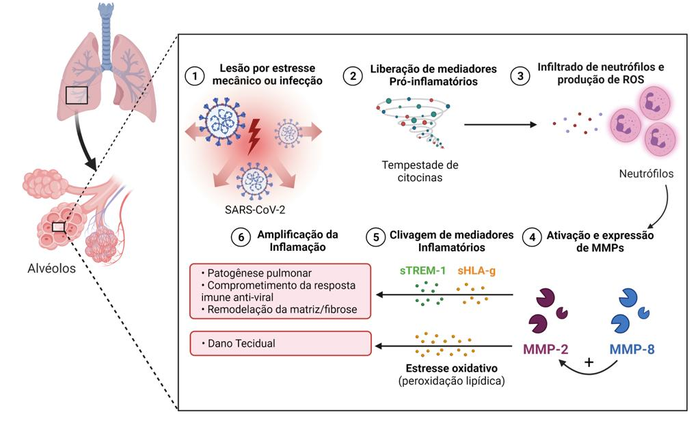 Study shows how the enzyme storm triggered by SARS-CoV-2 damages the lungs and may cause lasting complications. Courtesy of Carlos Arterio Sorgi/USP

Brazilian researchers have discovered a mechanism linked to severe lung damage caused by COVID-19, offering a new possibility of treatment. An article on the study published in the journal Biomolecules reports that this is the first time scientists have shown that enzyme activity and expression of two matrix metalloproteinases, MMP-2 and MMP-8, increase significantly in the lungs of severe COVID-19 patients.

This enzyme “storm” contributes to exacerbated inflammation of the lungs, which eventually alters their functions. Matrix metalloproteinases (MMPs) are enzymes that participate in protein breakdown, and normally play an important role in wound healing and tissue remodeling, but in excess can damage the lungs.

Previous research showed that a cytokine storm causes a hyperinflammatory response to infection by SARS-CoV-2, leading to acute respiratory distress syndrome (ARDS). The mechanism discovered in the recently published study appears to dysregulate MMPs and may be associated with the formation of pulmonary fibrosis and its severe complications.

“We discovered that the MMPs act on the lungs in two ways: via tissue injury and via modulation of immunosuppression by releasing inflammatory mediators in cell membranes, such as sHLA-G, an important immune response mediator,” says Carlos Arterio Sorgi, an author of the article. Sorgi is a professor of biochemistry at the University of São Paulo’s Ribeirão Preto School of Philosophy, Sciences and Letters (FFCLRP-USP).

Tissue injury is caused when tissue detects a harmful outside stimulus or foreign body, triggering inflammation and activating immune cells, which produce mediators that lead to acute oxidative stress.

Sorgi is one of the coordinators of ImmunoCovid, a multidisciplinary research consortium involving 11 researchers affiliated with FFCLRP-USP and the Federal University of São Carlos (UFSCar). They are collaborating on several research projects, sharing data and samples.

The penultimate author of the article is Raquel Fernanda Gerlach, a professor at the Ribeirão Preto Dental School (FORP-USP) who specializes in MMPs. “The consortium partnered with Professor Gerlach to address the more complex issues that appeared in this case,” Sorgi said.

The researchers found significantly higher levels of MMP-2 and MMP-8 in the tracheal aspirate of COVID-19 patients than the controls, and the samples from patients who died of the disease had higher levels than those who survived.

During the action of MMPs in the lungs, cell membranes release soluble proteins sHLA-G and sTREM-1, which are responsible for causing immunosuppression there, so that the virus meets no resistance instead of stimulating the immune system.

The analysis showed that levels of sHLA-G and sTREM-1 were high in COVID-19 patients and that MMP-2 was involved in the release of sHLA-G.

A 2020 study by ImmunoCovid concluded that monitoring sTREM-1 in blood plasma as soon as symptoms of the disease appear is important to support decision making by medical teams and to help predict disease severity and outcomes (more at: agencia.fapesp.br/34528/).

In the study, lung neutrophil counts were also higher in COVID-19 patients. Neutrophils are a type of white blood cell and are among the first immune cells to respond to infection. Excessive recruitment of neutrophils into the alveolar space can cause lung injury, as they release large amounts of proteases, reactive oxygen species, and extracellular neutrophil extracellular traps (NETs), which are detrimental to host tissues, and this, in turn, can trigger activation of MMPs.

Although the molecular basis of the immunopathology of SARS-CoV-2 is still poorly understood, it is well established that lung infection is associated with hyperinflammation and tissue damage. MMPs are key factors in the processes that lead to pneumonia and progression to severe COVID-19.

MMPs were previously investigated as biomarkers of the disease, as exemplified by a study reported last year by another research group at Ribeirão Preto Medical School (FMRP-USP) in Biomedicine & Pharmacotherapy.

The more recent study led by Sorgi and Gerlach clearly detected MMPs in lung pathogenesis, and they can therefore be considered potential therapeutic targets. According to Sorgi, the plan is to continue the research by testing an MMP inhibitor in animal models in conjunction with anti-inflammatory drugs to see if this strategy averts or reverses severe COVID-19. One such drug is doxycycline, an antibiotic available on the Brazilian market and currently used to treat diseases such as typhoid and pneumonia.

“We’ll have to start from scratch. A new project will be required, including partnerships with overseas groups, working with animal models and then focusing on clinical applications,” he said.