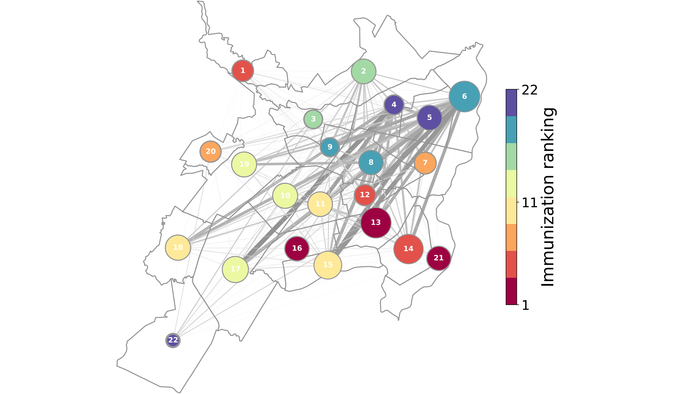 The map represents the city of Santiago de Cali as a network in which nodes represent its districts. The sizes of the nodes are proportional to the human population in each district, while the nodes are colored according to their importance for the release of Wolbachia-carrying mosquitoes. The links in the network represent mobility flows between Cali's districts. Courtesy of Adriana Reyna-Lara

Dengue is the most widespread mosquito-borne disease in the world, and to date, there are no medical treatments for people suffering from this disease. The virus causes symptoms ranging from high fevers to severe bleeding and shock, can be life-threatening, and presents an enormous burden on health systems.

Reporting in a study published in Chaos, researchers from Spain, Portugal, and Colombia developed a model the virus. In 2009, researchers discovered mosquitoes carrying Wolbachia bacteria lessen the chances for the dengue virus to impact humans.

Mosquitoes do not acquire Wolbachia bacteria in their natural environment, however. This bacterium must be introduced in vitro in mosquitoes' eggs, which are later released in areas affected by dengue transmission. Mosquitoes infected with Wolbachia naturally take over the local mosquito population.

The researchers use real data on human and vector activity in a framework that can be analyzed from a mathematical point of view, allowing them to re-create and understand the epidemiological situation. In this way, they can identify those geographical areas with the greatest vulnerability, creating a ranking of areas that prioritizes those where Wolbachia-carrying mosquitoes can have the strongest and most beneficial impact on the spread of the dengue virus.

"One might think that the most populated areas are those in which Wolbachia release would be most beneficial. However, this is not always true," said co-author Jesus Gomez-Gardenes, from Universidad del Valle in Colombia.

The authors found once they immunize the most vulnerable geographical area, the ranking of the remaining areas is affected, giving rise to a new scenario that tells them where they should concentrate resources in the second instance and beyond.

The findings from this research will be beneficial to many groups, such as the World Mosquito Program, which is currently releasing Wolbachia-infected mosquitoes to protect the global community from diseases such as dengue, chikungunya, yellow fever, and Zika.

In these kinds of initiatives, the information about the most vulnerable areas within cities or regions proved the researchers' model could complement field studies to find targets that maximize the benefit for the whole community.

"Data-driven models have also proven useful to tackle the evolution and mitigation of other diseases such as COVID-19," said Gomez-Gardenes. "Hopefully, the framework developed for dengue can be further generalized for tackling the control of other vector-borne diseases."

The paper, "A metapopulation approach to identify targets for Wolbachia-based dengue control," is authored by Adriana Reyna-Lara, David Soriano Panos, Juddy Heliana Arias-Castro, Hector J. Martínez, and Jesus Gomez-Gardenes. The article will appear in Chaos on April 19, 2022 at https://aip.scitation.org/doi/full/10.1063/5.0087435.