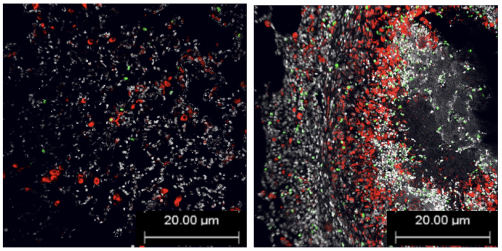 Lung tissue of animals with TB that started cART two weeks post SIV infection (left) versus at four weeks post SIV infection (right). There are far fewer green spots on the left, which indicate fewer macrophages are dying and latent TB is kept more under control, thanks to starting cART earlier. Red spots are also macrophages. Courtesy of Texas Biomed

Two weeks makes a big difference in treating the animal version of HIV and latent tuberculosis, researchers from Texas Biomedical Research Institute, Southwest National Primate Research Center and colleagues report this month in the Journal of Clinical Investigation. The finding is another piece in the puzzle of the complex interaction between HIV and tuberculosis (TB), and can help advance development of therapies and a combined vaccine for the two diseases in humans.

“Most humans are able to control a low dose of TB infection by maintaining it in a dormant form called latent tuberculosis infection,” says Riti Sharan, PhD, a staff scientist at Texas Biomed and first paper author. “But if they get co-infected with HIV, then there is a high possibility that TB is reactivated and the patient ultimately dies of TB. Our objective is to improve existing interventions or identify new ones to prevent latent TB from being reactivated.”

To help study what happens in humans, researchers turn to nonhuman primates, which contract simian immunodeficiency virus (SIV), the monkey version of HIV, as well as tuberculosis. The researchers found that when animals with a latent TB infection start combined antiretroviral therapy (cART) against SIV two weeks after infection, the animals fare much better than if cART is started at four weeks post SIV infection.

“Originally, we did not think that two weeks would make this much of a difference, but to our surprise, it did,” Sharan says. “The findings were very dramatic and clear.”

Chronic, or ongoing, activation of an immune response, might sound like it should be a good thing to help fight illness. But it can also play a central role in exacerbating illness. When the immune cells are chronically activated, it leads to exhaustion and cell death, and this opens up a major gap in the body’s defense system, Sharan explains. That is when is appears latent tuberculosis can become reactivated.

“This paper adds to the growing body of evidence from our lab that shows chronic immune activation is key to driving reactivation of latent TB,” says Deepak Kaushal, PhD, a professor at Texas Biomed and senior paper author. “But it is the first to really look at the timing difference for administering ART in animal models, which is will be critical for future studies and helping develop treatments and vaccines.”

The researchers note that the difference of two weeks may not directly apply to humans, in part, because most people are unlikely to be diagnosed and begin treatment for HIV within two weeks of infection. The real value of the finding is identifying chronic immune activation as the main driver of latent TB reactivation following HIV infection, and now being able to study potential mechanisms for protection.

“Ultimately, we aim to use this information to design a therapy that would enable patients to prevent latent TB reactivation by limiting the HIV-driven chronic immune activation,” Sharan says.

The research was done in collaboration with the Emory University School of Medicine, Tulane National Primate Research Center and Washington University in St. Louis.