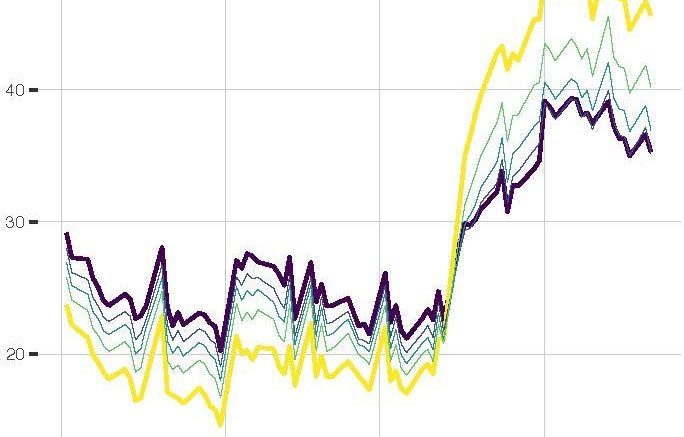 A graph from the study depicts the percentage of people staying completely at home on weekdays, by income quintile. The highest income levels are represented in yellow, and the lowest are in purple. This was measured with census-tract level income using SafeGraph mobile phone data. Courtesy of J.Weill et. al.

The study, published today in the Proceedings of the National Academy of Sciences, used anonymized data from mobile device location pings between January and April 2020 to find that social distancing in the United States varies strongly by income.

The study showed about a 25 percentage point jump of the wealthiest census tracts staying completely at home compared with a 10 percentage point increase in staying at home in the poorest communities.

"We found that before the pandemic, individuals in the wealthiest neighborhoods tended to be the least likely to stay completely at home on a given day," said lead author Joakim Weill, a graduate student with the UC Davis Department of Agricultural and Resource Economics. "But when the states of emergency came into play, individuals living in the wealthiest areas stayed home the most. It was a complete reversal."

The study does not determine the causes for this reversal, though the researchers highlight plausible mechanisms and note that lower-income communities tend to have more essential workers who also have less capacity to work at home compared to people in more affluent areas.

The results indicate a double burden of the pandemic for lower-income communities, which previous studies show have higher levels of pre-existing health conditions and less access to healthcare. This study shows they also exhibit less of the social distancing that could help buffer against COVID-19.

"As policymakers are thinking about emergency relief packages, this points to the need for lower-income regions to be an area of focus in order to build capacity for social distancing and other measures critical to reduce the spread of this disease," said senior author Michael Springborn, an environmental economist and associate professor with the UC Davis Department of Environmental Science and Policy. "This is just one piece of a broader set of emerging results showing that lower-income neighborhoods are particularly vulnerable as the pandemic proceeds."

The scientists compared mobility data from SafeGraph, Place IQ and Google Mobility, which was freely shared to the researchers for the study.

Both Weill and Springborn are part of the UC Davis NatuRE Policy Lab. Additional co-authors include Matthieu Stigler from Stanford University and Olivier Deschenes of UC Santa Barbara.

The research was supported by Emergency COVID-19 Research Seed Funding provided by the California Breast Cancer Research Program of the University of California.

Be the first to comment on "Study Asserts Social Distancing Varies by Income in U.S."